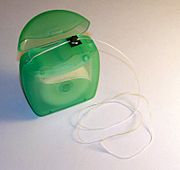 Dental floss is a special type of thread. It is used for cleaning spaces between teeth which cannot be reached by toothbrushes. It is important to floss before brushing teeth and to floss at least once a day. Tooth brushing will not clean food that is packed between teeth. This 'food packing' can lead to unhealthy teeth and gums. Bacteria grow in this 'packed food' between teeth. These bacteria cause the surface of teeth (enamel) to break down. Then the teeth and gums and sometimes even the jaw can become seriously diseased.

These bacteria that come from the food on the teeth and between the teeth are called "plaque" or "bacterial plaque" and also can cause the gums to become less healthy. "Gingivitis" which means gum disease is one type of disease that flossing helps to prevent. Very serious diseases can start on the teeth and move to the bone of the jaw, damaging the jaw badly. Flossing your teeth reduces the danger of these serious diseases of the jaw bone. These hard-to-cure jaw bone diseases are called "periodontal disease".

Dental floss can do most things that a toothpick can do but dental floss is much thinner than a toothpick and can thus get to places that most toothpicks cannot reach. So floss presumably does a better job at getting bits of food out from between the teeth, relieving discomfort and pain quicker.

When a person first starts flossing, bleeding can happen. This is normal and happens because teeth and gums that are not flossed are less healthy. It will stop as the teeth and gums get healthier with flossing.

All content from Kiddle encyclopedia articles (including the article images and facts) can be freely used under Attribution-ShareAlike license, unless stated otherwise. Cite this article:
Dental floss Facts for Kids. Kiddle Encyclopedia.