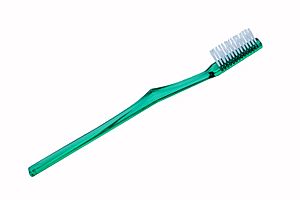 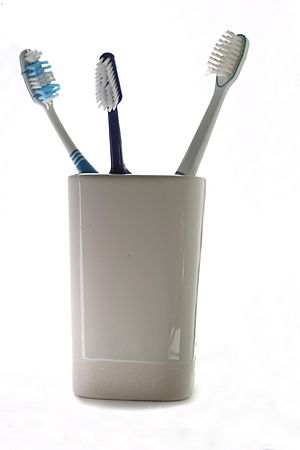 Three plastic toothbrushes in a cup

Toothbrushes were first invented by a prisoner. Before anyone had thought of a toothbrush, people kept their teeth clean by chewing on a stick until one end got soft and frayed like a brush. Sometimes they dipped a finger in chalk or salt and then rubbed their teeth. Toothpicks were another way to take care of teeth, and toothpicks were very fancy then. They were made of gold or jewels, and people would stick them in their hats or hang them on necklaces when they were not using them.

The first brushes came from China, where the Chinese made them out of hairs pulled from the back of wild hogs. The kind of toothbrush we know came from Joseph Addis. He worked on the toothbrush while he was in jail. First, he saved a bone from one of his meals and poked some holes in it. The prison guard gave him some bristles. Joseph tied the bristles into little bundles, cut them to make them even, put glue on the ends, and stuffed them into the holes. The company he started still make millions of toothbrushes every year.

The word toothbrush came from the two parts of the word, first a noun and then a verb or noun. The action of brushing teeth with a toothbrush is basically the use of the invention of Joseph Addis.

All content from Kiddle encyclopedia articles (including the article images and facts) can be freely used under Attribution-ShareAlike license, unless stated otherwise. Cite this article:
Toothbrush Facts for Kids. Kiddle Encyclopedia.