Kids Encyclopedia Facts
Not to be confused with Pandalus.

Pandanus is a genus of monocots with some 750 accepted species. They are palm-like, dioecious trees and shrubs native to the Old World tropics and subtropics. The greatest number of species are found in Madagascar and Malesia. Common names include pandan, screw palm, and screw pine. They are classified in the order Pandanales, family Pandanaceae. 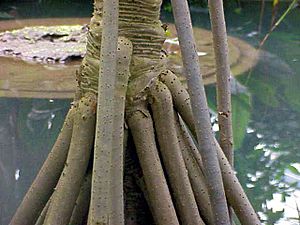 Often called pandanus palms, these plants are not closely related to palm trees. The species vary in size from small shrubs less than 1 m (3.3 ft) tall, to medium-sized trees 20 m (66 ft) tall, typically with a broad canopy, heavy fruit, and moderate growth rate. The trunk is stout, wide-branching, and ringed with many leaf scars. Mature plants can have branches. Depending on the species, the trunk can be smooth, rough, or warty. The roots form a pyramidal tract to hold the trunk. They commonly have many thick stilt roots near the base, which provide support as the tree grows top-heavy with leaves, fruit, and branches. These roots are adventitious and often branched. The top of the plant has one or more crowns of strap-shaped leaves that may be spiny, varying between species from 30 cm (12 in) to 2 m (6.6 ft) or longer, and from 1.5 cm (0.59 in) up to 10 cm (3.9 in) broad.

They are dioecious, with male and female flowers produced on different plants. The flowers of the male tree are 2–3 cm (0.79–1.18 in) long and fragrant, surrounded by narrow, white bracts. The female tree produces flowers with round fruits that are also bract-surrounded. The individual fruit is a drupe, and these merge to varying degrees forming multiple fruit, a globule structure, 10–20 cm (3.9–7.9 in) in diameter and have many prism-like sections, resembling the fruit of the pineapple. Typically, the fruit changes from green to bright orange or red as it matures. The fruits can stay on the tree for more than 12 months.

These plants grow from sea level to 3,300 m (10,800 ft). Pandanus trees are of cultural, health, and economic importance in the Pacific, second only to the coconut on atolls. They grow wild mainly in semi-natural vegetation in littoral habitats throughout the tropical and subtropical Pacific, where they can withstand drought, strong winds, and salt spray. They propagate readily from seed, but popular cultivars are also widely propagated from branch cuttings by local people.

Species growing on exposed coastal headlands and along beaches have thick 'stilt roots' as anchors in the loose sand. Those stilt roots emerge from the stem, usually close to but above the ground, which helps to keep the plants upright and secure them to the ground.

While pandanus are distributed throughout the tropical and subtropical islands and coastlines of the Atlantic, Indian and Pacific Oceans, they are most numerous on the low islands and barren atolls of Polynesia and Micronesia. Other species are adapted to mountain habitats and riverine forests.

The tree is grown and propagated from shoots that form spontaneously in the axils of lower leaves. Pandanus fruits are eaten by animals including bats, rats, crabs, and elephants, but the vast majority of species are dispersed primarily by water. Its fruit can float and spread to other islands without help from humans.

Pandanus has multiple uses, which is dependent in part on each type and location. Some Pandanus are a source of food while others provide raw material for clothing, basket weaving and shelter. 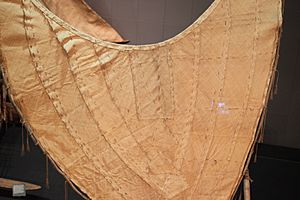 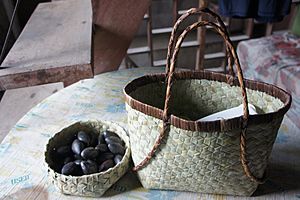 A bayong, a traditional Philippine basket woven from leaves of karagumoy (Pandanus simplex) in the hexagonal kinab-anan pattern

Pandanus leaves are used for handicrafts. Artisans collect the leaves from plants in the wild, cutting only mature leaves so that the plant will naturally regenerate. The leaves are sliced into fine strips and sorted for further processing. Weavers produce basic pandan mats of standard size or roll the leaves into pandan ropes for other designs. This is followed by a coloring process, in which pandan mats are placed in drums with water-based colors. After drying, the colored mats are shaped into final products, such as placemats or jewelry boxes. Final color touch-ups may be applied. 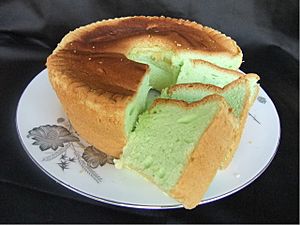 Pandan leaves from Pandanus amaryllifolius are used widely in Southeast Asian and South Asian cuisines to add a distinct aroma to various dishes and to complement flavors like chocolate. Because of their similarity in usage, pandan leaves are sometimes referred to as the "vanilla of Asia." Fresh leaves are typically torn into strips, tied in a knot to facilitate removal, placed in the cooking liquid, then removed at the end of cooking. Dried leaves and bottled extract may be bought in some places. Finely sliced pandan leaves are used as fragrant confetti for Malay weddings, graves etc. 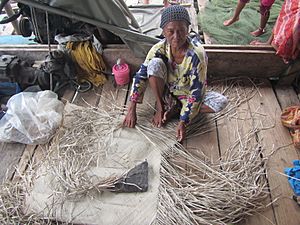 In Sri Lanka, pandan leaves are used heavily in both vegetable and meat dishes, and are often grown in homes. It is common practice to add a few pieces of pandan leaf when cooking red or white rice as well.

In Southeast Asia, pandan leaves are mainly used in sweets such as coconut jam and pandan cake. In Indonesia and Malaysia, pandan is also added to rice and curry dishes such as nasi lemak. In the Philippines, pandan leaves are commonly paired with coconut meat (a combination referred to as buko pandan) in various desserts and drinks like maja blanca and gulaman.

In Indian cooking, the leaf is added whole to biryani, a kind of rice pilaf, made with ordinary rice (as opposed to that made with the premium-grade basmati rice). The basis for this use is that both basmati and pandan leaf contains the same aromatic flavoring ingredient, 2-acetyl-1-pyrroline. In Sri Lanka, pandan leaves are a major ingredient used in the country's cuisine.

Kewra (also spelled Kevda or Kevada) is an extract distilled from the pandan flower, used to flavor drinks and desserts in Indian cuisine. Also, kewra or kevada is used in religious worship, and the leaves are used to make hair ornaments worn for their fragrance as well as decorative purpose in western India.

Species with large and medium fruit are edible, notably the many cultivated forms of P. tectorius (P. pulposus) and P. utilis. The fruit is eaten raw or cooked. Small-fruited pandanus may be bitter and astringent.

Karuka nuts (P. julianettii) are an important staple food in New Guinea. Over 45 cultivated varieties are known. Entire households will move, and in some areas will speak a pandanus language at harvest time. The taste is like coconut or walnuts.

Throughout Oceania, almost every part of the plant is used, with various species different from those used in Southeast Asian cooking. Pandanus trees provide materials for housing; clothing and textiles including the manufacture of dilly bags (carrying bags), fine mats or [[ʻie toga]]; sails, food, medication, decorations, fishing, and religious uses. 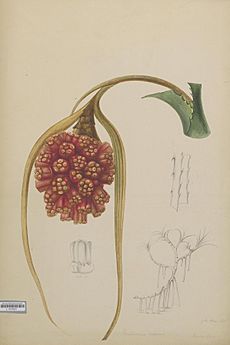 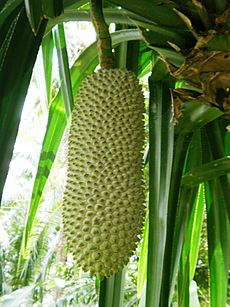 All content from Kiddle encyclopedia articles (including the article images and facts) can be freely used under Attribution-ShareAlike license, unless stated otherwise. Cite this article:
Pandanus Facts for Kids. Kiddle Encyclopedia.