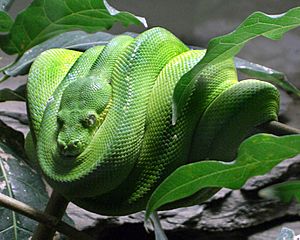 A python in a tree

Python is the name given to a family of constricting snakes. Such snakes are not venomous. The family in question is the Pythonidae. Pythons are more closely related to boas than to any other snake family. Boulenger (1890) thought this group was a subfamily (Pythoninae) of the family Boidae (boas). However, boas produce live young, while pythons lay eggs.

Pythons can be found in Australia, Southeast Asia and Africa. Pythons can range from 3 feet long in species like ball pythons to 29 feet in species like reticulated pythons. Longer pythons have been seen, but the reports are not secured. Larger pythons can prey on animals as large as a house cat or a full-grown deer. In Africa, there are pythons that eat gazelles. To catch its prey, the python squeezes it to death, then swallows it whole. Despite their size, pythons are rarely dangerous to humans.

The python comes from Asia. It can be up to 900 cm long and weigh up to 90 kg, but males are much smaller and lighter than females. The python can live up to 30 years. The breeding time is between 60 or 70 days.

Research indicates that all snakes, including pythonids, are descended from a venomous ancestor.

Pythons, like all snakes, are reptiles without limbs. Their long body only consists of a head, trunk and tail.

All content from Kiddle encyclopedia articles (including the article images and facts) can be freely used under Attribution-ShareAlike license, unless stated otherwise. Cite this article:
Python Facts for Kids. Kiddle Encyclopedia.