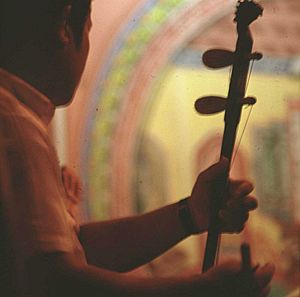 The erhu; pinyin: èrhú) is a two-stringed bowed musical instrument which may also be called a "southern fiddle", and sometimes known in the Western world as the "Chinese violin" or a "Chinese two-stringed fiddle". It is used as a solo instrument as well as in small ensembles and big orchestras. It is the most popular of the huqin family of bowed string instruments used by various ethnic groups of China. The erhu is used in both traditional and contemporary music arrangements, such as in pop, rock, jazz, etc. 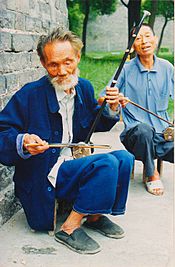 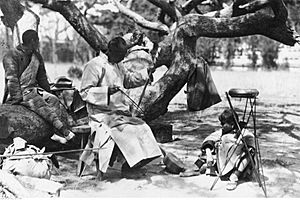 A notable composer for the Erhu was Liu Tianhua (Liú Tiānhuá; 1895–1932), a Chinese musician who also studied Western music. He composed 47 exercises and 10 solo pieces (1918–32) which were central to the development of the Erhu as a solo instrument. His works for the instrument include Yue Ye (月夜; Yuè yè, Moon Night) and Zhu ying Yao hong (烛影摇红; Zhú yǐng yáo hóng, Shadows of Candles Flickering Red).

In addition to the solo repertoire, the erhu is one of the main instruments in regional music ensembles such as Jiangnan sizhu, Chinese opera ensembles, and the modern large Chinese orchestra.

The Erhu is used in the music of the Cirque du Soleil show O and in solo performances in select Shen Yun tours. Even fusion progressive rock groups like The Hsu-nami have incorporated the erhu into their music and it is their lead instrument. It is incorporated in the Taiwanese black metal band ChthoniC and used in the song "Field Below" by Regina Spektor.

An instrumental album by Erhu artist Song Fei (宋飞; Song Fei) expresses the painting Along the River During the Qingming Festival (清明上河图; Qīngmíng Shànghé Tú) drawn in the Song Dynasty by Zhang Zeduan (张择端; Zhang Zeduan). It was performed with the Erhu, Jinghu, Banhu, Gaohu, etc., to show the Livelihood, Trade, Festival of the Song Dynasty; the album contains 18 parts.

Musical groups for wedding celebrations in Cambodia often use Erhu.

An Erhu is listed in the credits for the Doug Anthony All Stars album Icon as being played by Paul McDermott. The Erhu can be heard in the character songs of China, a character in Axis Powers Hetalia.

The bow is woven between the strings. Because the hairs are slackened, the bow hand is used to press the hairs away from the bow stick to create enough tension to stroke the strings properly.

The Erhu is almost always tuned to the interval of a fifth. The inside string (nearest to player) is generally tuned to D4 and the outside string to A4. This is the same as the two middle strings of the violin.

The Erhu is played sitting down, with the sound box placed on the top of the left thigh and the neck held vertically. However, performers of more recent years have played while standing up using a specially developed belt-clip.

The bow is held with an underhand grip. The bow hair is adjusted so it is slightly loose. The fingers of the right hand are used to push the hairs away from the stick in order to create tension in the hairs. The bow hair is placed in between the two strings and both sides of the bow hair are used to produce sound, the player pushes the bow away from the body when bowing the A string (the outside string), and pulls it inwards when bowing the "inside" D string.

Aside from the usual bowing technique used for most pieces, the Erhu can also be plucked, usually using the second finger of the right hand. This produces a dry, muted tone (if either of the open strings is plucked, the sound is somewhat more resonant) which is sometimes desired in contemporary pieces.

The left hand alters the pitch of the strings by pressing on the string at the desired point. As the instrument has no frets, the tone is slightly muddled, but resonant. Techniques include hua yin (slides), rou xian (vibrato), huan ba (changing positions), etc.

All content from Kiddle encyclopedia articles (including the article images and facts) can be freely used under Attribution-ShareAlike license, unless stated otherwise. Cite this article:
Erhu Facts for Kids. Kiddle Encyclopedia.