Python molurus is a large nonvenomous python species. It is found in many tropic and subtropic areas of South Asia and Southeast Asia.

It has various common names: Indian python, black-tailed python and Indian rock python. The species is limited to Southern Asia. It is generally lighter colored than the Burmese python. It can grow to 3 metres (9.8 ft).

The color pattern is whitish or yellowish with the blotched patterns varying from shades of tan to dark brown. This varies with the terrain and habitat. Specimens from the hill forests of Western Ghats and Assam are darker. Those from the Deccan Plateau and east coast of India are usually lighter.

The longest scientifically recorded specimen, which came from Pakistan, was 4.6 metres (15 ft) in length and weighed 52 kilograms (115 lb). 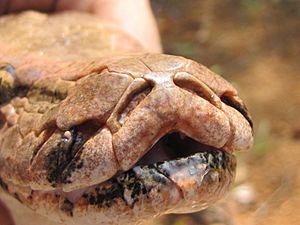 The pits of Indian python

The rock python's color pattern is whitish or yellowish with the blotched patterns varying from tan to dark brown shades. This varies with terrain and habitat. Specimens from the hill forests of Western Ghats and Assam are darker, while those from the Deccan Plateau and Eastern Ghats are usually lighter.

Because of confusion with the Burmese python, exaggerations, and stretched skins in the past, the maximum length of this subspecies is difficult to tell. The longest scientifically recorded specimen, collected in Pakistan, was 4.6 m (15 ft) long and weighed 52 kg (110 lb). In Pakistan, Indian pythons commonly reach a length of 2.4–3.0 m (7.9–9.8 ft). 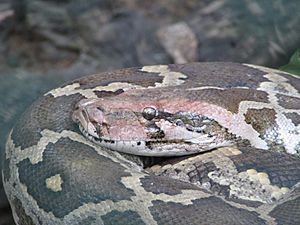 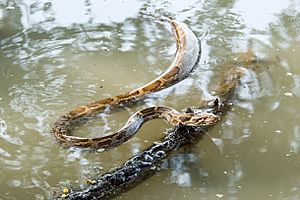 Lethargic and slow moving even in their native habitat, they exhibit timidity and rarely try to attack even when attacked. Locomotion is usually with the body moving in a straight line, by "walking on its ribs". They are excellent swimmers and are quite at home in water. They can be wholly submerged in water for many minutes if necessary, but usually prefer to remain near the bank. 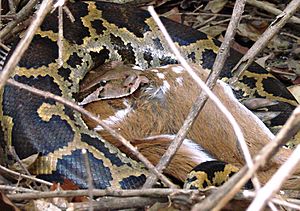 Like all snakes, Indian pythons are strict carnivores and feed on mammals, birds, and reptiles indiscriminately, but seem to prefer mammals. Roused to activity on sighting prey, the snake advances with a quivering tail and lunges with an open mouth. Live prey is constricted and killed. One or two coils are used to hold it in a tight grip. The prey, unable to breathe, succumbs and is subsequently swallowed head first. After a heavy meal, they are disinclined to move. If forced to, hard parts of the meal may tear through the body. Therefore, if disturbed, some specimens disgorge their meal to escape from potential predators. After a heavy meal, an individual may fast for weeks, the longest recorded duration being 2 years. The python can swallow prey bigger than its diameter because the jaw bones are not connected. Moreover, prey cannot escape from its mouth because of the arrangement of the teeth (which are reverse saw-like). 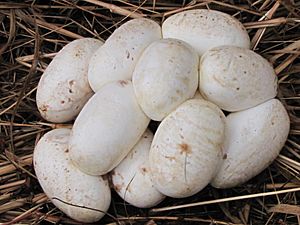 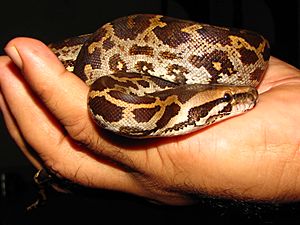 Oviparous, up to 100 eggs are laid by a female, which she protects and incubates. Towards this end, they are capable of raising their body temperature above the ambient level through muscular contractions. The hatchlings are 45–60 cm (18–24 in) in length and grow quickly. An artificial incubation method using climate-controlled environmental chambers was developed in India for successfully raising hatchlings from abandoned or unattended eggs.

All content from Kiddle encyclopedia articles (including the article images and facts) can be freely used under Attribution-ShareAlike license, unless stated otherwise. Cite this article:
Python molurus Facts for Kids. Kiddle Encyclopedia.