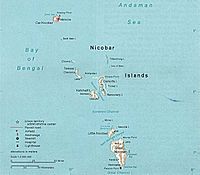 The Nicobar Islands are an island chain in the eastern Indian Ocean. They are part of India.

The Nicobar islands include 22 islands of different sizes. The largest one is Great Nicobar. The total land area of the chain is 1841 km². The highest point on the Nicobars is Mount Thullier at 642 m. The population of the islands was 42,026 in 2001, roughly 65% of whom are indigenous peoples (the Nicobarese and Shompen peoples, listed among the Scheduled Tribes of India), and 35% migrants from India and Sri Lanka.

The Nicobars are located southeast of the Indian subcontinent.They are separated form the subcontinent by the Bay of Bengal by about 1,300 km and are separated from the Andaman Islands to the north by the 150 km wide Ten Degree Channel and are 189 km from the Indonesian island of Sumatra to the southeast. The Andaman and Nicobar islands separate the Bay of Bengal from the Andaman Sea. Until the 2004 Indian Ocean earthquake, Indira Point, south of Great Nicobar, was the southernmost point in India.

All content from Kiddle encyclopedia articles (including the article images and facts) can be freely used under Attribution-ShareAlike license, unless stated otherwise. Cite this article:
Nicobar Islands Facts for Kids. Kiddle Encyclopedia.