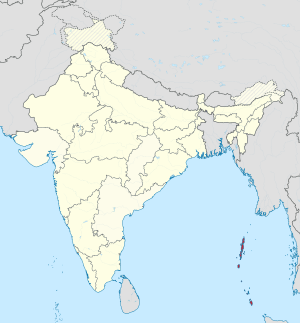 The Andaman and Nicobar Islands is a union territory of India. The name is often shortened to A & N Islands, or ANI.

The islands are in the Indian Ocean, in the southern part of the Bay of Bengal. The capital of this territory is the Andamanese town of Port Blair.

It is made of two island groups - the Andaman Islands and the Nicobar Islands - separating the Andaman Sea to the east, from the Indian Ocean. These two groups are separated by the 10° N parallel, the Andamans lying to the north of this latitude, and the Nicobars to the south. The channel that separates ANI is the 10° degree channel. This islands have the only active volcano in India, Barren Island. These islands are also uninhabitated. It also has the lowest point in India, The Indira Point

The territory's population in the last (2001) census of India was 356,152. Added together, the total land area of the territory is around 6,496 km² or 2,508 mi², it is larger than the Palestinian territories but smaller than Georgia territory of Abkhazia.

Territorial symbols of Andaman and Nicobar

All content from Kiddle encyclopedia articles (including the article images and facts) can be freely used under Attribution-ShareAlike license, unless stated otherwise. Cite this article:
Andaman and Nicobar Islands Facts for Kids. Kiddle Encyclopedia.