Bay of Bengal facts for kids 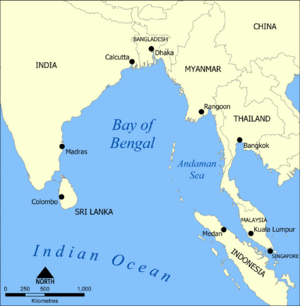 The Bay of Bengal is a bay. It is in the northeastern part of the Indian Ocean. The bay is also east of the Malay Peninsula and west of India. It looks like a triangle. It is called the "Bay of Bengal", because to the north are the Indian state of West Bengal and the country of Bangladesh.

All content from Kiddle encyclopedia articles (including the article images and facts) can be freely used under Attribution-ShareAlike license, unless stated otherwise. Cite this article:
Bay of Bengal Facts for Kids. Kiddle Encyclopedia.