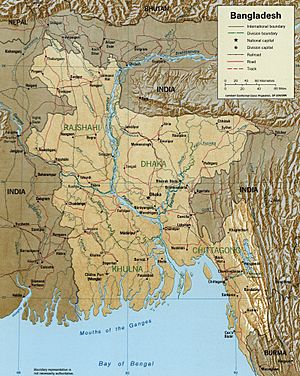 A Map showing major rivers in Bangladesh including Meghna. 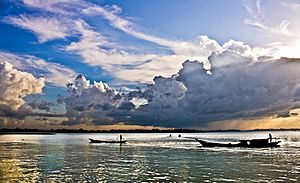 The Meghna River is an important river in Bangladesh. It is one of the three that forms the Ganges delta. This delta is the largest on earth. The river meets Padma River in Chandpur District. The river ends in the Bay of Bengal in Bhola District.

The Meghna is the widest river of those that are completely inside Bangladesh. At one point near Bhola, Meghna is 12 km wide. In its lower parts this river follows almost a straight line. Despite its very calm and quiet look, this river is the cause of many deaths every year. Several ferry sinkings in the past have killed hundreds. Near Chandpur it is very dangerous.

All content from Kiddle encyclopedia articles (including the article images and facts) can be freely used under Attribution-ShareAlike license, unless stated otherwise. Cite this article:
Meghna River Facts for Kids. Kiddle Encyclopedia.