The Krishna River is the fifth longest river in India. It is 1,300 kilometres (810 miles) long. It is the second longest river in South India. The river is the major source of irrigation in the states of Telangana, Maharashtra, Karnataka and Andhra Pradesh.

The tributaries of this river include Bhima, Tungabhadra, Veena, Koyna, Panchganga, Munneru, and Musi.

Krishna river is one of the rivers whose water energy is harnessed to a large extent by various hydro electric power stations in India.

It causes heavy soil erosion during the monsoon floods. It flows fast and furious, often reaching depths of over 75 feet (23 m). In October 2009, heavy floods occurred, isolating 350 villages and leaving millions homeless, which is believed to be first occurrence in 1000 years. The entire city of Kurnool was immersed in approximately 10 ft (3 m) water for nearly 3 days. 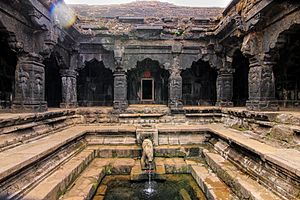 This river is respected by Hindus as sacred. The river is also believed to remove all sins of people by taking a bath in this river. The centre of attraction is the Krishna Pushkaram fair which is held once in twelve years on the banks of the Krishna river. There are many pilgrimage places in Maharashtra, Karnataka, Telangana and Andhra Pradesh on the course of the river.

The first holy place on the river Krishna is at Wai, known for the Mahaganpati Mandir and Kashivishweshwar temple. Temples like Dattadeva temple, which is worshipped by the people of Maharashtra, are located on the banks of Krishna at Narsobawadi and Audumbar near Sangli. Yadur is one of the important holy places in Karnataka which is located on the bank of krishna. 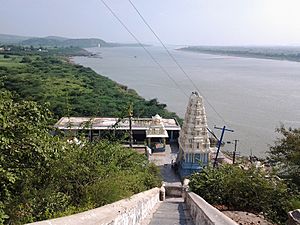 Veerabhadra temple is the famous temple, many devotees visit this place. Also, located on the banks of the river Krishna are the Sangameshwar Shiva temple at Haripur, goddess Kanaka Durga Temple in Vijayawada and Ramling temple near Sangli, Mallikarjuna Jyotirlinga, Amareshwara Swamy Temple, Dattadeva temple, Sangameshwara Shiva temples at Alampur & Gadwal in Telangana. 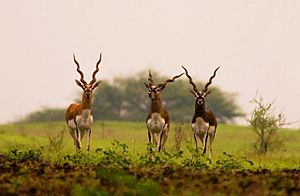 Wide spread area near to the Krishna river holds the rich flora and fauna. The last surviving mangrove forests in the Krishna estuary have been declared as the Krishna Wildlife Sanctuary. The sanctuary is the home to the large number of resident and migratory birds.

The following are few other wildlife sanctuaries located in the Krishna basin.

All content from Kiddle encyclopedia articles (including the article images and facts) can be freely used under Attribution-ShareAlike license, unless stated otherwise. Cite this article:
Krishna River Facts for Kids. Kiddle Encyclopedia.