Kurnool is the headquarters of Kurnool district in the Indian state of Andhra Pradesh. The city is often referred as The Gateway of Rayalaseema. It was the capital of Andhra State from 1 October 1953 to 31 October 1956.

The original name of Kurnool is found in historical records as Kandanavōlu or Kandanōlu. It used to be a crossing on the Tungabhadra River, where the bullock cart caravans are believed to have greased their wheels ("kandana" being a reference to grease). 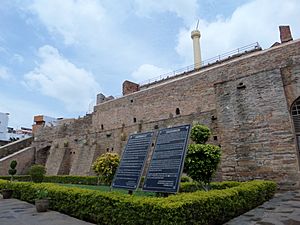 The Ketavaram rock paintings from the Paleolithic era and are (18 kilometres from Kurnool).

Also the Jurreru Valley, Katavani Kunta and Yaganti in Kurnool District have some important rock art and paintings in the vicinity which may be dated from 35,000 to 40,000 years ago.

Belum Caves are geologically and historically important caves in the district. There are indications that Jain and Buddhist monks were occupying these caves centuries ago.

Many Buddhists relics were found inside the caves. These relics are now housed in Museum at Ananthapur. Archaeological survey of India (ASI) found remnants of vessels and other artifacts of pre-Buddhist era and has dated the remnants of vessels found in the caves to 4500 BC.

All content from Kiddle encyclopedia articles (including the article images and facts) can be freely used under Attribution-ShareAlike license, unless stated otherwise. Cite this article:
Kurnool Facts for Kids. Kiddle Encyclopedia.