SS John Oxley is a steamship that previously served as a pilot boat and lighthouse and buoy tender. The ship was built in Scotland in 1927 for the Queensland Government. The vessel was requisitioned by Royal Australian Navy during the World War II. Returned to her duties after the war, John Oxley remained active until 1968, when her deteriorating condition made her unusable. In 1970, the ship was donated by the Queensland Government to the Lady Hopetoun and Port Jackson Marine Steam Museum (now the Sydney Heritage Fleet) for preservation, but due to other projects, work was sidelined until 2004. As of 2017, the ship is undergoing restoration at Rozelle Bay. 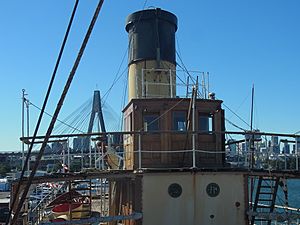 Wheelhouse with chartroom below, Sept 2013

In early October 1927, John Oxley left Greenock, Scotland bound for Brisbane via the Red Sea and Indian Ocean. While en route in the Mediterranean Sea, she responded to a distress signal by the tugboat Jackstay and towed it to Malta. It arrived in Brisbane on 9 December 1927.

She was delivered to the Government of Queensland Harbours and Marine Department, whom she served as a pilot boat in Moreton Bay and buoy tender and lighthouse tender along the Queensland coast.

During World War II, John Oxley was requisitioned by the Royal Australian Navy and a 20mm Oerlikon anti-aircraft gun was mounted on the stern. She was returned to her former duties in 1946, and converted from coal to oil fuel that same year.

John Oxley continued to serve as a pilot tender, lighthouse and buoy tender until 1968 when she was decommissioned. In her later years she had become increasingly decrepit, such that in 1964 the Seamen's Union of Australia's journal called her a "rust heap" with "the worst living conditions of any ship on the entire Australian coast". 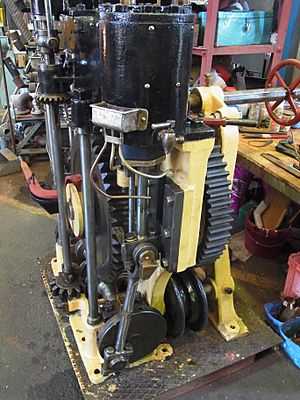 John Oxley was donated to the Lady Hopetoun and Port Jackson Marine Steam Museum (now the Sydney Heritage Fleet) , arriving in Sydney in August 1970 and initially moored at Birkenhead Point. She saw very little repair work until 1997, when restoration on another ship, the barque James Craig, was at a stage where she could be taken off the floating dock. Until then, its hull had gradually deteriorated and she was badly in need of repairs when put on the floating dock in place of the James Craig.

Since 2002 the John Oxley has been under continuous restoration on land at the Heritage dockyard of the Sydney Heritage Fleet, Rozelle Bay. During eighty years on the water, the ship had incurred substantial corrosion to the hull, decks and superstructure. The majority of the plates of the ship's riveted hull have required complete replication using the same hot riveted method as when the ship was built.

The restoration work also entails the repair and reconditioning of all machinery, masts and rigging, timber work, internal fitout and generally making the ship seaworthy. The ship will satisfy the survey requirements for safe operation and make coastal voyages.

All content from Kiddle encyclopedia articles (including the article images and facts) can be freely used under Attribution-ShareAlike license, unless stated otherwise. Cite this article:
SS John Oxley Facts for Kids. Kiddle Encyclopedia.