Newstead is a riverside suburb of the city of Brisbane, Queensland, Australia. It is situated 3 kilometres (1.9 mi) north of the Brisbane central business district.

The north-west portion of the suburb, centred on Breakfast Creek Road, is predominantly commercial, with the remainder of the suburb now mainly residential.

At the last census, over 67% of the households in Newstead consisted of couples without children and a further 20% were single person households. Over 82% of dwellings in the area are units and 15% are stand-alone houses. Newstead is known for trendy cafes and restaurants, upmarket studio apartments and renovated older homes with well-established gardens. It is one of the more expensive suburbs in which to purchase a property in Brisbane, with the mean unit price for the 2006 calendar year reaching $1,400,000.

The suburb's present role as an up-market residential suburb belies its industrial past. Timber yards, asbestos works, wharves and woolstores once dominated the eastern side of the suburb. The tall iron structure of the No. 2 gasholder on Skyring Terrace is a remnant of the Newstead Gasworks, which was established in 1887 as Brisbane's second gas works. The structure, however, was originally located at the Petrie Bight gasworks, where it was erected in 1873.

The suburb was served by first horse drawn trams from 1885. From 1897 electric trams ran along Commercial Road (until December 1962) and along Ann and Wickham Streets until April 1969. Light Street tram and bus depot was located in the suburb. It opened as a tram depot in 1885, saw its last trams in December 1968 and finally closed as a bus depot in the mid 1990s, making it one of Queensland's longest continually operating industrial sites. All traces of the depot and its heritage have been obliterated and the site redeveloped, although a remnant of its trackwork - a unique three way set of points - has been preserved at the Brisbane Tramway Museum. 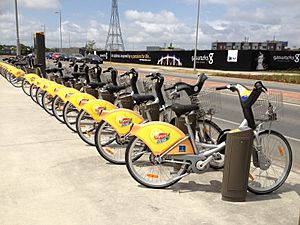 The suburb was also served by a Queensland railways train line, which branched off the main north coast line at Bowen Hills and descended towards the river and Breakfast Creek Road, crossing it to reach the industry, wool stores and wharves along the river. The line closed in the early 1990s. Some remnants of the rail line have been preserved in the wool stores precinct.

Pride of the suburb is Newstead House, Brisbane’s oldest existing home, built for pioneer Darling Downs squatter Patrick Leslie in 1846. It is set in superb grounds overlooking the mouth of the creek and is within easy walking distance of the famed Breakfast Creek Hotel - a flamboyant Victorian structure which has been described as 'the very soul of Brisbane'. Newstead House’s glory days came during the time of the residence of Captain John Clements Wickham, the official resident and magistrate of the Moreton Bay settlement and a noted and gracious host. Wickham had previously been Commander of the HMS Beagle, made famous by its association with Charles Darwin.

Newstead has a number of heritage-listed sites, including:

All content from Kiddle encyclopedia articles (including the article images and facts) can be freely used under Attribution-ShareAlike license, unless stated otherwise. Cite this article:
Newstead, Queensland Facts for Kids. Kiddle Encyclopedia.