Newstead House is Brisbane's oldest surviving residence and is located on the Breakfast Creek bank of the Brisbane River, in the northern Brisbane suburb of Newstead, in Queensland, Australia. Built as a small cottage in the Colonial-Georgian style in 1846, the cottage was extended and today is painted and furnished in a late Victorian style. 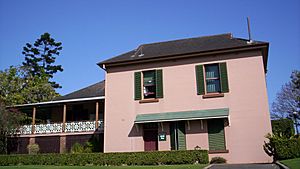 Newstead House is said to have taken its name from Newstead Abbey, Nottinghamshire, England, a former Augustinian priory which became the Byron family home.

The property was referred to as Newstead until it left the possession of J.C. Wickham in 1859 after which it became known as Newstead House.

Newstead House was built as a residence by Brisbane's first architect and builder Andrew Petrie for fellow Scottish settler Patrick Leslie; it was soon acquired by Captain John Wickham. Then it was leased to Attorney-General Ratcliffe Pring. It was later leased, then sold, then leased again to merchant and Member of the Queensland Legislative Council George Harris. George Harris and his wife Jane (née Thorn) lived in the house for 27 years. The Lysaght Brothers bought the property in March 1898 with the intention to demolish the house and build a factory that produced iron and rabbit-proof wire fencing. These plans to establish a factory at the property were abandoned due to the downturn in the agricultural sector.

It was purchased by the Brisbane City Council in 1918 and was the residence of the superintendent of their council parks. The Council leased part of the property to the Historical Society of Queensland in 1934 and it was used to store historical records. In 1939, the Queensland Parliament created a Trust and ownership was transferred to the Newstead House Trust.

The building was occupied by American troops during World War II. There is an Australian–American War Memorial in the grounds in memory of this. It was dedicated on 3 May 1952 by the Queensland Governor, Sir John Lavarack.

Newstead House is now a museum. It is open to the public, and concerts are sometimes held at the house and grounds.

Newstead House was listed on the Queensland Heritage Register in 1992. 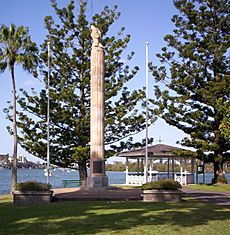 The land originally formed a part of the land purchased by Patrick Leslie in 1845 on which he built Newstead House.

In the 1920s the Brisbane City Council constructed an electrical substation for its tramway system in the grounds of the House. Since the closure of the tram system in 1969 the substation was purchased by the Newstead House Board of Trustees and has been used as a Resource Centre and offices for management staff.

In May each year the park is host to the commemoration of the Battle of the Coral Sea. The Australian-American monument in the park is dedicated to the United States service men and women for helping in the defence of Australia during World War II.

A playspace featuring an "Alice through the Looking Glass" theme has been developed by the Brisbane City Council is located on the southern side of the park, near Newstead Avenue.

All content from Kiddle encyclopedia articles (including the article images and facts) can be freely used under Attribution-ShareAlike license, unless stated otherwise. Cite this article:
Newstead House, Brisbane Facts for Kids. Kiddle Encyclopedia.