Albion is an inner north-eastern suburb in the City of Brisbane, Queensland, Australia. In the 2016 census, Albion had a population of 2,296 people.

Albion is bounded by Wooloowin in the north, Ascot in the east, Newstead in the south, and Windsor to the west, with Breakfast Creek defining the suburb border in its south and south-west. Sandgate Road, a major road on the north side of Brisbane, runs through the middle of the suburb. A variety of housing styles, from former workers' cottages through to modern brick homes and unit blocks, can be found in Albion.

The Albion Park Paceway, first established in the 1880s, is a harness racing club and greyhound racing track found in Breakfast Creek, a locality in southern Albion. 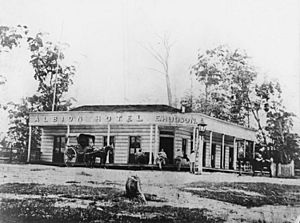 Albion Hotel, Brisbane, ca. 1866, from which the suburb of Albion takes its name

The name Albion comes from the Albion Hotel built by Thomas Hayseldon (also written as Hazeldon), which was so called because the white wall of John Petrie's quarry reminded Hayseldon of the England's white cliffs (Albion being an old name for England, from the Latin albus meaning white). From 1866 to 1870, the proprietor was Edward Hudson. 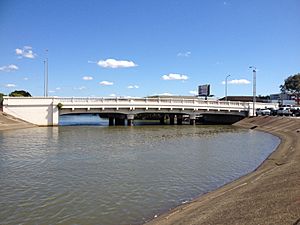 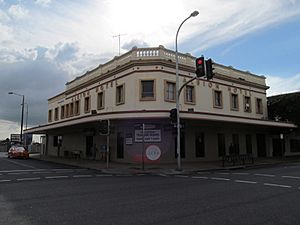 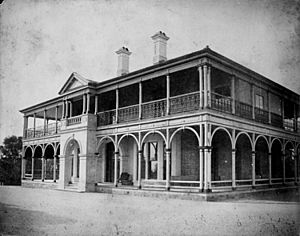 Albion has a number of heritage-listed sites, including:

The median age of the Albion population was 33 years, 4 years below the national median of 37.

Of the total population in Albion, 1.2% were Indigenous persons.

In wealth terms, the median weekly individual income in Albion is approximately A$200 higher than the Australian average, and a median weekly family income A$220 higher. The suburb has a significantly higher proportion of residents that have never married (49.0%) compared to the Australian average (33.2%) and, in turn, a lower proportion of married persons (29.6% vs 49.6%).

On the Queensland Rail City network, Albion is serviced by Albion railway station on the Airport, Doomben, Caboolture, Shorncliffe and Sunshine Coast lines.

Historically, Albion lay on the Clayfield tram line, along Sandgate Road. It was operated by the Brisbane City Council until 13 April 1969.

All content from Kiddle encyclopedia articles (including the article images and facts) can be freely used under Attribution-ShareAlike license, unless stated otherwise. Cite this article:
Albion, Queensland Facts for Kids. Kiddle Encyclopedia.