Wooloowin is an inner-north suburb of Brisbane, Australia located approximately 5–6 km north of the city's central business district. The origin of the suburb's name has been attributed to either the local Indigenous Australian term for a pigeon or the term for a species of fish. It was the home of Brisbane's first Resident Judge, Alfred Lutwyche. 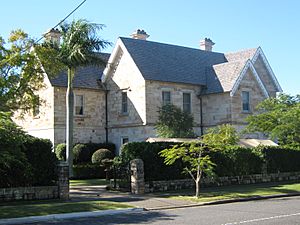 Kalinga is a residential district within Wooloowin. The area is predominantly flat, with a mix of small apartment blocks and houses, with some older style Queenslanders still extant. The area borders with Kalinga Park. This area is notable for the original residence of Alfred Lutwyche, known as Kedron Lodge.

Between 1927 and 1962 an electric tram service operated by the Brisbane City Council served the suburb, branching off the Chermside line at Kedron Park Road.

The Kalinga Wooloowin Residents' Association, Brisbane City Council and the local residents are currently discussing the idea of reinstating the suburb of Kalinga.

Wooloowin has a number of heritage-listed sites, including:

All content from Kiddle encyclopedia articles (including the article images and facts) can be freely used under Attribution-ShareAlike license, unless stated otherwise. Cite this article:
Wooloowin, Queensland Facts for Kids. Kiddle Encyclopedia.