Lutwyche is a northern suburb in the City of Brisbane, Queensland, Australia. In the 2016 census, Lutwyche had a population of 3,454 people. 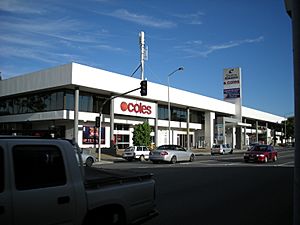 Lutwyche Road, a busy thoroughfare that is part of Metroad 3 is the main road through the suburb. Lutwyche Road is lined with many small shops and restaurants in addition to the Centro Lutwyche shopping centre. Kedron Brook, a creek lined with parklands and a bikeway, forms the north-western boundary of Lutwyche. 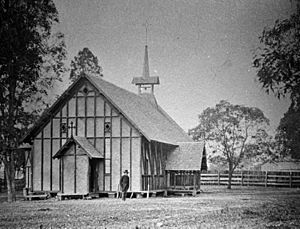 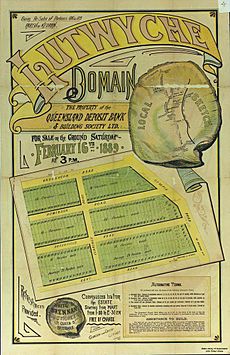 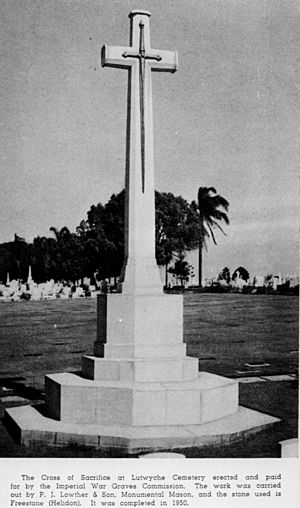 Cross of Sacrifice at Lutwyche Cemetery, circa 1954

The suburb is named after Alfred Lutwyche, a judge of the Supreme Court of New South Wales who was appointed as Supreme Court judge at Moreton Bay on 21 February 1859, shortly before Queensland was granted self-government.

On 12 January 1864, Lutwyche purchased the site for what was to become St. Andrew's Church of England (1866) on Lutwyche Road, donating the land to the Church in 1865, and was actively involved in the construction of the church. On his death on 12 June 1880, he was buried on the southern side of the Church where his grave remains a prominent feature of the churchyard dominated by a granite Celtic cross that was erected as the headstone by his widow Mary Ann. A portrait of Alfred Lutwyche can be found in the Supreme Court building in Brisbane.

A Cross of Sacrifice commemorating those who served in World War I and World War II was erected at Lutwyche Cemetery in 1950.

Prior to December 1968 the suburb was served by frequent tram services which converged along Lutwyche Road, from Chermside, Kalinga (until 1962) and Stafford, with the Stafford line branching off at Bradshaw Street, Lutwyche. Further south Grange trams branched off Lutwyche Road at Maygar Street, on the border of Lutwyche and Windsor. These services combined to provide an off-peak service of a tram every 2½ minutes along Lutwyche Road in the late 1950s.

Lutwyche has a number of heritage-listed sites, including:

Lutwyche is well served by frequent express (333) and all-stops Brisbane Transport buses which run along Lutwyche Road to the city.

After the completion of the Brisbane Airport Link and Northern Busway, the Windsor Lutwyche precinct is served by the Lutwyche busway station, which provides an entrance to the Northern Busway tunnel at Truro Street and consists of an open-air entrance plaza and new bus stops at Truro Street (southbound), and outside Windsor State School (northbound). The Lutwyche busway station was completed in June 2012.

All content from Kiddle encyclopedia articles (including the article images and facts) can be freely used under Attribution-ShareAlike license, unless stated otherwise. Cite this article:
Lutwyche, Queensland Facts for Kids. Kiddle Encyclopedia.