Windsor is an inner northern suburb in the City of Brisbane, Queensland, Australia. In the 2016 census, Windsor had a population of 7,013 people. 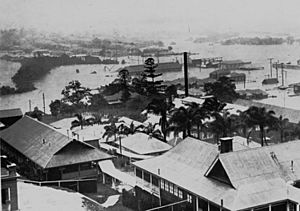 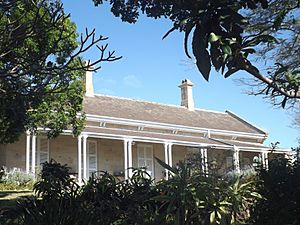 Land was first sold in this remote part of then New South Wales in 1854 and development was slow until the opening of the Bowen Bridge in 1860, named after the newly arrived first governor of Queensland, Sir George Bowen, allowing easier access to the district. At that time the district was known as Breakfast Creek or Upper Breakfast Creek. Distinctive homes including Rosemount, Oakwal, The Bower, Wilston House and Eildon were built on large portions of land.

In 1864, pioneer settlers approached the Government for aid to establish a local school. "The Bowen Bridge Road National School" consisted of a simple wooden building and headmaster's house erected on a stone foundation and opened on 17 July 1865 on Bowen Bridge Road, adjacent to Thondley's Farm. Sixteen students enrolled for the first day and by the end of the first year, 112 students were on the register. In 1915, the school transferred across the road and was renamed "Windsor State School". After World War I, the original school and headmaster's house was demolished and the land developed as the Windsor Memorial Park upon which a war memorial was constructed.

Swan Hill, O'Connell Town, Eildon, Albion, and Lutwyche were locality names before the appearance of the Windsor name when the shire council was formed.

The Shire of Windsor was formed in 1887. It was named after Windsor Castle in England as it was Queen Victoria's golden jubilee year. In July 1895 the Council decided to erect permanent chambers and consulted Brisbane-born architect Thomas Coutts, to design a council chambers. The first meeting of the Windsor Shire Council in the new premises was conducted on 9 March 1897. The building, constructed out of Brisbane tuff from the adjacent quarry, now home of the Windsor and Districts' Historical Society, is open every Sunday and Monday from 1–4 pm.

The 1974 floods affected the suburb. Various streets close to Breakfast Creek were affected.

Windsor contains a corridor gazetted by the Queensland government since 1972 for the construction of the Northern Freeway between Bowen Hills and Carseldine. Although the freeway was not built, the official plan still exists and a freeway through Windsor may be constructed in the future. Part of the original Northern Freeway is now the Clem Jones Tunnel (Clem7). It emerges close to Campbell Street, Bowen Hills. Several businesses along Lutwyche Road in Windsor were resumed as part of this process and as part of the Airport Link Tunnel and Northern Busway projects. Several of these businesses have protested the City Council's moves. 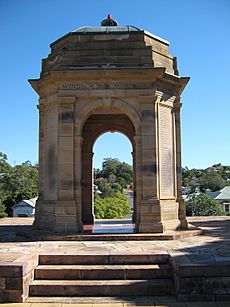 In 1925, a Cenotaph was erected on the site of the old school in the memory of the men who had enlisted from the Town of Windsor and who had lost their lives in World War I. It was unveiled on 25 April 1925 (Anzac Day) by the Member of the Queensland Legislative Assembly for Windsor, Charles Taylor. A rotunda bandstand was erected in War Memorial Park and provided shelter for the Windsor Town Band, which played there on Sundays.

Downey Park, the so-called "home of women's sport in Brisbane" is located in Windsor. Just next to the park is the Northey St City Farm, which first opened in 1994 and provides hands-on education and training in agricultural activities. The farm also features a plant nursery and markets every Sunday morning. 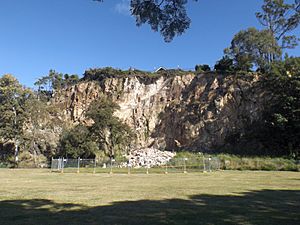 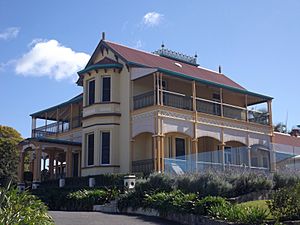 Windsor has a number of heritage-listed sites, including:

All content from Kiddle encyclopedia articles (including the article images and facts) can be freely used under Attribution-ShareAlike license, unless stated otherwise. Cite this article:
Windsor, Queensland Facts for Kids. Kiddle Encyclopedia.