Wilston, a suburb of Brisbane, Queensland, Australia, is located approximately three kilometres from the Brisbane central business district, and is a mixture of old and new styles of architecture, from workers' cottages to modern architect-designed homes on Wilston Hill.

Wilston is home to many professionals, including many medical professionals, due to its inner city location, proximity to the Royal Brisbane and Women's Hospital and views of the city that are available from more elevated streets.

In recent years, the area has been transformed by the revamping of Kedron Brook Road, an early precursor to the City Council’s urban renewal process that was to roll out across much of inner Brisbane. This has seen a vibrant hub of al-fresco dining evolve, which in turn has increased the popularity of the area and led to a significant increase in the cost of housing in recent years.

Residents are also well serviced by public transport (Wilston train station and regular bus routes) and leisure parks and walkways running alongside Enoggera Creek. The area is also close to local sporting grounds such as Downey Park and Ballymore Stadium. 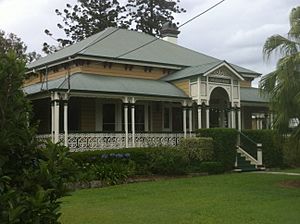 The Turrbal clan occupied what is today known as Wilston. 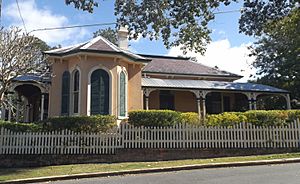 The area became known as Wilston after the home of the same name built there by the Honourable William Wilson MLC, who settled in the district in 1868. The home, which was constructed circa 1876, was named Wilston House after Wilson's birthplace home at Derrykeeghan Mills. Enniskillen County Fermanagh, Ireland.(The family believes it is short for Wilson Town)

In 1884 the land passed to businessman John Stevenson MLA, who subdivided the property.

Between 1924 and 1931 Estates were created to provide more land for housing development.

Major General William Cahill, a commissioner of police in Queensland, also lived at Wilston House for a period. During his residence he further developed the grounds, which became known as a sanctuary for birds and native fauna.

Peter Beattie, the former Premier of Queensland, had previously resided in this suburb.

Oakleigh House, at 17 Murray Street, Wilston, has been a landmark for over fifty years. It was occupied, from 1902, by George Murray, a Brisbane police magistrate and postmaster. It is a colonial timber house which still stands proudly preserved today. 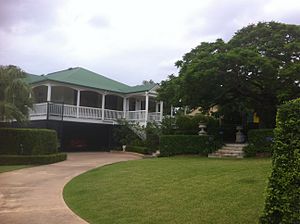 In 1905, 29 Murray Street was built for the Zoeller family. The house became a reception centre in June 1948, and was the venue for over 25,000 wedding and other receptions until in 1990, 'Oakleigh' was also converted to a function venue, and both houses operated as such until 1995.

Uanda, a house at 27 Clifton Street, is listed on the Queensland Heritage Register

All content from Kiddle encyclopedia articles (including the article images and facts) can be freely used under Attribution-ShareAlike license, unless stated otherwise. Cite this article:
Wilston, Queensland Facts for Kids. Kiddle Encyclopedia.