Newmarket is an inner north-west suburb in the City of Brisbane, Queensland, Australia. It is an older, mostly residential suburb containing pre-war and post-war homes, including many fine examples of the Queenslander style of home. Over the last few years, some medium-density townhouses and unit blocks have appeared as well. In the 2016 census, Newmarket had a population of 4,979 people. 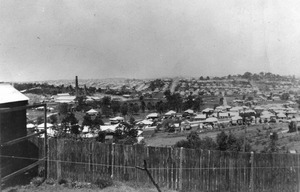 Brisbane suburb of Newmarket ca. 1925, chimney of the Newmarket Brickworks is visible on the left

Newmarket was originally known as "The Three Mile Scrub" due to its distance from the city, and Ashgrove Avenue, which links Enoggera Road with Waterworks Road to the west, was known as Three Mile Scrub Road. As settlement continued northward along Kelvin Grove Road in the late 19th Century, livestock saleyards opened in the area bordered by Enoggera Road, Newmarket Road, Wilston Road and Alderson Street, and were serviced by Newmarket train station after the rail line was extended from Mayne Junction in 1899. As urban development continued in Newmarket the saleyards were moved to Cannon Hill in 1931. Evidence of the saleyards can still be seen in a number of narrow laneways, most likely old cattle tracks between stockyards, that still exist in this neighbourhood.

Newmarket has a number of heritage-listed sites, including:

The median age of the Newmarket population was 32 years of age, 5 years below the Australian median.

Via Bus, Newmarket is serviced by Brisbane Transport buses to Chermside, Mitchelton and to The City.

Newmarket offers a number of options to locals and nearby residents. The Brisbane City Council operates a public swimming pool in Sedgeley Park, on Alderson Street. Enoggera Creek, which forms the southern boundary of Newmarket, contains a linear park and bikeway. The suburb has several sporting ovals, including Spencer Park, which is home to former NSL and current Brisbane Premier League team Brisbane City Football Club and Windsor Royals Baseball Club, and McCook Park, which is home to Newmarket SFC soccer club.

The first stage of the Newmarket Shopping Centre opened in 2005. The shopping centre contains a Coles supermarket, post office, Commonwealth Bank of Australia branch, newsagent and several specialty stores. There are plans to build a cinema complex at this site in the future. The historic Newmarket Hotel, established 1897, has been completely renovated and is now a buzzing hive of activity most nights of the week. Both the Newmarket Hotel and shopping centre are located on the corner of Newmarket Road and Enoggera Road, at Newmarket. Brisbane Mexican cuisine pioneers Pepe's Mexican Restaurant moved to Newmarket in 2006.

All content from Kiddle encyclopedia articles (including the article images and facts) can be freely used under Attribution-ShareAlike license, unless stated otherwise. Cite this article:
Newmarket, Queensland Facts for Kids. Kiddle Encyclopedia.