Grange is a northern suburb in the City of Brisbane, Queensland, Australia. In the 2016 census Grange had a population of 4,318 people. 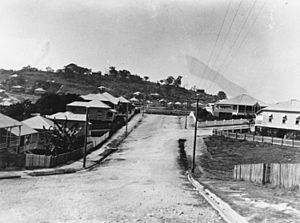 New homes in the Brisbane suburb of The Grange, 1929

Prior to the arrival of European settlers, the Grange area consisted of areas of open grassland and thinly wooded plains. Urban development of the area commenced in 1903 with the subdivision of T. K. Peate's property into "the Grange Estate". The name of the suburb is derived from that of Peate's property: "Grange" is believed to be an Old English word meaning granary.

Many houses in the suburb are of the Queenslander architectural style.

The median age of the Grange population was 36 years of age, 1 year below the Australian median.

Fortitude Valley Rugby League Football Club, Valleys Diehards was founded in 1908 and is Brisbane's oldest Rugby League club. Located in Bega Street at Emerson Park since 1971, teams range from Under 6 up to seniors including a BRL A-Grade Mens and a BHP Premiership Womens team which is a Queensland State competition.

All content from Kiddle encyclopedia articles (including the article images and facts) can be freely used under Attribution-ShareAlike license, unless stated otherwise. Cite this article:
Grange, Queensland Facts for Kids. Kiddle Encyclopedia.