Chermside is a suburb in the City of Brisbane, Queensland, Australia. In the 2016 census Chermside had a population of 9,315 people. The suburb is situated 9.8 kilometres (6.1 mi) by road north of the Brisbane CBD. It is home to a large Westfield shopping centre.

The median age of the Chermside population was 35 years of age, 2 years below the Australian median.

The Chermside area was first settled by Europeans in the late 19th century. The first plot of land was sold on 23 May 1866, and the population has progressively increased since with a significant increase with the post-war residential development.

In November 1868 Cobb & Co. stagecoaches began to travel through Chermside on the way to the goldfields at Gympie. 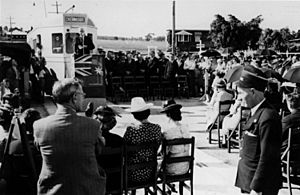 Brisbane's tramway network finally reached the suburb on 29 March 1947, and Chermside remained the northernmost point on the system until the line to Chermside was closed on 2 December 1968. The tram line along Gympie Road was separated from other traffic (this is commonly called "reserved track"), which resulted in fast travel times along this portion of the route. Another feature of the Chermside tram line were the rose gardens which bordered the reserved track portion of the line. A picture of the Chermside tram line can be viewed at [1].

Originally named Downfall Creek, the suburb's name was changed to Chermside in 1903 after the Governor of Queensland, Sir Herbert Chermside.

The Dawn theatre first opened in 1928 (showing The Man Who Laughs), and closed on 2 August 2005 (with Mr. & Mrs. Smith). It was the last single screen cinema in Brisbane. 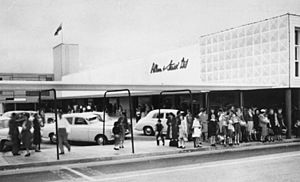 Westfield Chermside first opened in May 1957 as The Chermside Drive-in Shopping Centre with an Allan & Stark's department store and a small arcade of a dozen shops, before becoming a Myer department store. It was the first drive-in shopping centre in Australia. It is now the largest single level shopping centre in Australia, with a 3 storey Myer, as well as a 16 screen Birch, Carrol and Coyle megaplex. It is also home to Brisbane's first Apple Store.

The early 1970s saw the opening of Queensland's first Kmart store in Chermside, which was situated next to a Coles supermarket. Both of these stores closed in the mid-1990s and have been replaced with a Woolworths supermarket and specialty stores. Both Kmart and Coles have been relocated in Westfield Chermside.

Chermside has many outdoor recreational facilities, including two large parks, 7th Brigade Park, and Marchant Park - on land donated 9 September 1921 by soft drink manufacturer George Marchant. Before and during World War I this land had been variously the home of artillery and light horse units. During World War II a diverse range of volunteers, soldiers, and camps were at Chermside, such as U.S. Army units, including a number of African American soldiers. A Kitty Hawk airplane on a training flight crashed there in 1943, killing the pilot and instructor.

Chermside has had a library since 1909 - it now forms a branch of the Brisbane City Council Library service, and is situated next to the Kedron Wavell RSL and some sports facilities, including a moderate water park. The Prince Charles Hospital (Public) was opened in 1959 and Holy Spirit Northside Private Hospital in 2001.

A history of Chermside was published by a local teacher and part-time historian Mr David R Teague in 1973 [3].

One of the earliest settlers in Chermside was Andrew Hamilton who purchased acreage there in 1875. Recently returned from the Gympie gold rush, Hamilton tried his hand at farming in Chermside. After failing as a farmer, Hamilton opened a successful blacksmith shop on Gympie Road which also served as the local post office. Hamilton's only son Thomas Andrew Hamilton became a councillor for Kedron Shire and was also a notable diarist. T.A. Hamilton kept detailed daily diaries from 1890 until his death in 1951 at the age of 91. Most of the diaries survive and are being digitised and transcribed by the Chermside and District Historical Society. Hamilton Road in Chermside is named after Andrew Hamilton.

All content from Kiddle encyclopedia articles (including the article images and facts) can be freely used under Attribution-ShareAlike license, unless stated otherwise. Cite this article:
Chermside, Queensland Facts for Kids. Kiddle Encyclopedia.