Kelvin Grove is an inner northern suburb in the City of Brisbane, Queensland, Australia. In the 2016 census, Kelvin Grove had a population of 7,927 people. 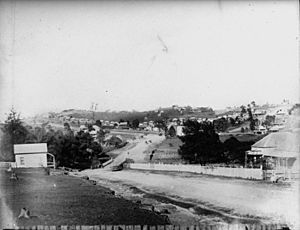 Kelvin Grove was part of the Shire of Ithaca (later the Town of Ithaca) before the town was amalgamated into the City of Greater Brisbane in 1925.

In 1901 electric trams commenced operations along Kelvin Grove Road, running to the city. The tram service ceased in December 1968 and since that time diesel and more recently compressed natural gas buses operated by the Brisbane City Council have served the suburb. Electric trolley-buses, also operated by the Brisbane City Council connected the suburb with Fortitude Valley, via Herston between 1953 and 1969.

Kelvin Grove has a number of heritage-listed sites, including:

The median age of the Kelvin Grove population was 27 years of age, 10 years below the Australian median.

The suburb is also home to the Kelvin Grove Campus of the Queensland University of Technology.

All content from Kiddle encyclopedia articles (including the article images and facts) can be freely used under Attribution-ShareAlike license, unless stated otherwise. Cite this article:
Kelvin Grove, Queensland Facts for Kids. Kiddle Encyclopedia.