Herston is an inner suburb of Brisbane, Australia located 3 kilometres (1.9 mi) north of the Brisbane CBD.

Herston is dominated by the Royal Brisbane and Women's Hospital. The hospital campus is also shared by the Queensland Institute of Medical Research and the former Royal Children's Hospital.

Herston is mostly a residential suburb, with some areas of light industry near the main roads. Many of Herston's residents are employed by the hospital or nearby at the Queensland University of Technology in Kelvin Grove. There is also a significant student population that studies at the university.

The median age of the Herston population was 29 years of age, 8 years below the Australian median. 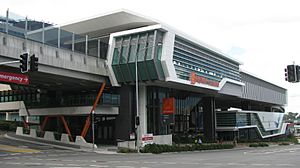 Prior to December 1968 the eastern side of the suburb was served by frequent tram services along Bowen Bridge Road, with routes converging from Chermside, Kalinga (until 1962), Stafford, and Grange. These services combined to provide the suburb with an off-peak service of a tram every 2½ minutes along Bowen Bridge Road in the late 1950s. The western side of the suburb was served by trams which ran along Kelvin Grove Road. This service also ceased in December 1968.

Between 1953 and November 1968, the suburb was also served by Brisbane City Council trolley-buses which connected the suburb with Fortitude Valley and ran through to Stanley Bridge in East Brisbane. The trolley-buses ran along Herston Road and Butterfield Street, past Ballymore football ground, terminating near the intersection of Prospect Terrace and Kelvin Grove Road.

Brisbane City Council diesel buses continue to serve the suburb. The Inner-Northern Busway runs through the south of the suburb, having been built to divert buses off congested major roads. 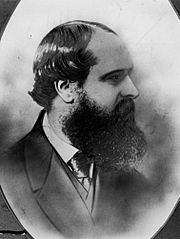 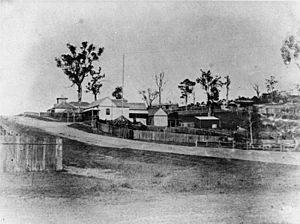 Herston was first settled by Europeans in the 1850s. Sir Robert Herbert, Queensland's first premier, built a farm in the area, and lived in the farmhouse with his then Attorney-General, John Bramston. The pair named their house Herston, a combination of their surnames, which eventually became the name of the suburb.

Herston has a number of heritage-listed sites, including:

All content from Kiddle encyclopedia articles (including the article images and facts) can be freely used under Attribution-ShareAlike license, unless stated otherwise. Cite this article:
Herston, Queensland Facts for Kids. Kiddle Encyclopedia.