Mitchelton is a suburb of the City of Brisbane, in Queensland, Australia.

The suburb is located 8 kilometres (5.0 mi) from the Brisbane central business district some areas of Mitchelton can be 6 kilometres (3.7 mi) to the Brisbane central business district. Mitchelton is part of the northwestern suburbs. It is a growing suburb with many Queenslander style houses and leafy streets. The area is quite hilly and most of the suburb is on a north-facing slope.

The median age of the Mitchelton population was 35 years of age, 2 years below the Australian median.

Mitchelton is an area with a long history. Mitchelton's name comes from one particular family of the first settlers in the area. The Mitchell family emigrated from England in the 1850s. Nicolas Mitchell purchased an estate he named "Mitchelton" by 1875. This area was subdivided in the 1890s. 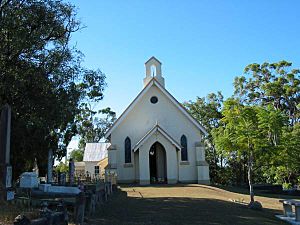 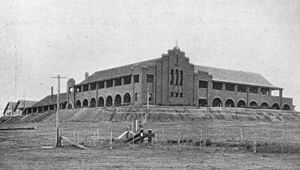 Mitchelton has a number of heritage-listed sites, including:

Mitchelton is now filled with many shops, schools and facilities, such as the Brookside Shopping Centre. Mitchelton is also home to many sporting teams in state competition.

Via bus, Mitchelton is served by Brisbane Transport buses to the Brisbane CBD, Chermside, Toowong and Ferny Grove.

All content from Kiddle encyclopedia articles (including the article images and facts) can be freely used under Attribution-ShareAlike license, unless stated otherwise. Cite this article:
Mitchelton, Queensland Facts for Kids. Kiddle Encyclopedia.