Enoggera is a suburb in the City of Brisbane, Queensland, Australia. In the 2016 census, Enoggera had a population of 5,157 people.

The word Enoggera is a wrongly spelled by an error made at the Government Lands Office, when the letter u was mistaken for n. It was intended that the name should be recorded as Euogerra, a contraction of the Turrbal phrase youara-ngarea meaning literally "sing-play" or song and dance. It refers to a ceremonial site used for dancing. It is said to have first applied to a site near the mouth of Breakfast Creek. It is possible, however, that the name was independently applied to a site at the place at presently known as Enoggera. They named the creek crossing in Enoggera "Bu-yu-ba", which means, "shin of leg". 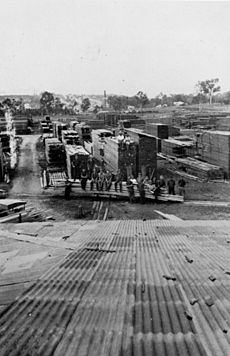 In 1845, John Brennan purchased six hectares of land in Enoggera. Six years later, Thomas Hayes moved to the area and bought thirty-three acres of land. Enoggera initially developed as a farming community with orchards and vineyards.

In the 1860s, the track to the Gympie goldfields passed through Enoggera, and this assisted with development. As the population increased, the first school opened in 1871, and the railway line to Enoggera Station opened in 1899.

In 1887, the local government Division of Enoggera was proclaimed, bound to north and south by Kedron Brook and Enoggera Creek, and stretching from Alderley to The Gap and beyond the Enoggera Dam. Enoggera became a shire in 1903 before being amalgamated into the City of Brisbane in 1925. In 1949, the tram line from Newmarket was extended along Samford Road to Enoggera. The tram line closed on 2 December 1968.

The median age of the Enoggera population was 30 years of age, 8 years below the Australian median.

78.9% of people were born in Australia compared with the national average of 66.7%. The next most common countries of birth were England 2.8% and New Zealand 2.7%. 87.0% of people spoke only English at home.

Enoggera has a number of heritage-listed sites, including:

Via bus, Enoggera is serviced by Brisbane Transport buses, predominantly from the bus-rail interchange at Enoggera Railway Station and at Wardell Street, which travel to the Brisbane CBD, Chermside, Ashgrove and Indooroopilly.

All content from Kiddle encyclopedia articles (including the article images and facts) can be freely used under Attribution-ShareAlike license, unless stated otherwise. Cite this article:
Enoggera, Queensland Facts for Kids. Kiddle Encyclopedia.