The Gap, Queensland facts for kids

The Gap is a north-western suburb in the City of Brisbane, Queensland, Australia. In the 2016 census, The Gap had a population of 16,692 people.

The Gap was named for its geographical location - a valley - as it is surrounded by hills on four sides - Mount Coot-tha, Taylor Range, Mount Nebo and Mount Glorious. Access to the area is via Waterworks Road, Settlement Road, Mount Nebo Road, Dillon Road and Gap Creek Road (which passes to the back of Mount Coot-tha).

Initially inhabited by the Turrbal people, The Gap was originally heavily forested. With the arrival of European settlement, timber felling became the first industry in the area, and with the removal of the timber the area was turned over to farming. The first crown lease of land was in 1851, to Darby McGrath who ran a sheep station across the entire valley. The first freehold land sale was made in 1858, to P.B. and J. Paten in the area where Paten road runs today. Access to The Gap in the 1850s was via tracks which became Waterworks and Payne Roads. They also provided access to Enoggera Dam which was built in 1866 to provide a water supply for Brisbane. Following World War I the area was broken up into smaller farms for returned servicemen, many of whom farmed poultry and dairy cattle. Many of these farms were too small to be commercially successful, however small pockets of farming remained in The Gap until the 1980s.

From 1879 The Gap was part of the Ithaca local government division, then part of the Shire of Enoggera from 1887 to 1925.

Masons jam factory used to be located to the east of the Ashgrove Golf Course, but has not existed for the past two decades. A gold mine was located near the entrance to Payne Road Primary School. The billabong between The Gap State High School and Payne Road Primary School used to be a favourite swimming location and over the years has been home to turtles, eels and platypus. It was named Shepherd's Pool, supposedly after a shepherd who was killed by aborigines in 1852, although the name may derive from a P.A. Shepherd, who leased the adjacent land in the 1930s. There used to be a toll gate located on Waterworks Road near what is now the entrance to Brisbane Forest Park. 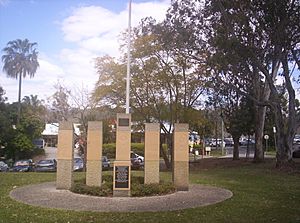 The Gap War Memorial is located at Walton Bridge Reserve and commemorates those who served in World War I and World War II.

The Gap was affected by a major storm on the afternoon of 16 November 2008. A microburst hit The Gap with extremely high winds, causing many trees to fall onto homes and major roads, as well as causing many houses to lose their roofs. 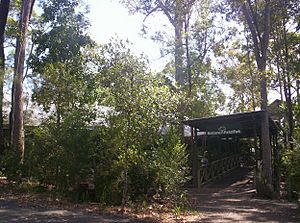 At the entrance to Walkabout Creek

The district was later subdivided into blocks of land for housing estates. The recreational activities of inhabitants of the suburb are well catered for, with many facilities including many sporting clubs (Soccer, Tennis, Athletics, Swimming and Golf etc.) and there are a number of lush green parks.

The Gap is also where the main entrance to Walkabout Creek, in what was previously known as Brisbane Forest Park, (now officially the southern part of D'Aguilar National Park), is located. A major bushland area in Brisbane's west, there is an information and wildlife education centre, with many Australian wildlife species, including marsupials, birds, fish and reptiles. For a number of years, now, there has been a resident platypus named Burrun at Walkabout Creek and, more recently, a second platypus named Willum (Burrun's half-brother). Bred at Healesville Sanctuary in Victoria, they are the sons of Barak, the platypus at Lone Pine Koala Sanctuary.

Ashgrove Golf Club is located in the Brisbane suburb of The Gap, at 863 Waterworks Road. Ashgrove Golf Club was formed in April 1939 as a nine-hole format. Over time the club expanded to eighteen holes utilizing freehold and leased land. The land was originally a dairy farm and market garden. Mark Winston was the original owner who leased the land to the club until the club bought the land in 1950 for ₤12,000. The club celebrated the 75th anniversary of the formation of the club with a week-long celebration of golf and social events in April 2014.

The suburb has a small shopping village (which extends from Walton Bridge Reserve to The Gap State High School and Payne Road State School).

There are also Christian churches of many denominations, as well as a local Police Station in the suburb.

Ashgrove Fire Brigade, which is at West Ashgrove, is also in close proximity to The Gap. Also, an ambulance station has now been opened close to The Gap.

The Enoggera Dam is located in the suburb and was the water supply for the area for many years. Waterworks Road, which is the main road into The Gap was named for the water works at the dam. There are bush walking tracks around the dam and it is a popular walking area. Swimming and paddle craft are now allowed on the dam at 'The Gap Beach'.

The Gap is served by a fortnightly visit of the Brisbane City Council's mobile library service at the car park in the sports ground at the end of Glenaffric Street.

Travel to, and within, The Gap is by road. As well as private vehicles, The Gap has a good public bus service. The main arterial road through The Gap is Waterworks Road, which heads east through the suburbs St Johns Wood, Ashgrove and Red Hill and then, as Musgrave Road, it continues to Brisbane city. Waterworks Road was widened, from two lanes to four lanes, along the 8 kilometres (5.0 mi) stretch of road between The Gap and Red Hill between July 1999 and December 2003. Total cost was $50 million.

Robert Forster (musician), one of the founding members of the musical group, The Go-Betweens, grew up in The Gap and wrote about the suburb in his 2016 memoir, Grant & I.

Photos of The Gap

All content from Kiddle encyclopedia articles (including the article images and facts) can be freely used under Attribution-ShareAlike license, unless stated otherwise. Cite this article:
The Gap, Queensland Facts for Kids. Kiddle Encyclopedia.