The Enoggera Reservoir suburb is named after the Enoggera Reservoir Dam. As of 12 February 2011, sufficient water inflows returned the reservoir to usable levels, and water is now used to supply neighbouring suburbs. Prior to this the reservoir levels were insufficient for water supply, primarily due to the drought which was experienced by South-East Queensland prior to the January 2011 floods.

Enoggera Reservoir has a number of heritage-listed sites, including: 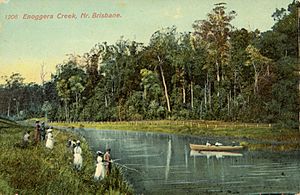 All content from Kiddle encyclopedia articles (including the article images and facts) can be freely used under Attribution-ShareAlike license, unless stated otherwise. Cite this article:
Enoggera Reservoir, Queensland Facts for Kids. Kiddle Encyclopedia.