Camp Mountain is a rural locality in the Moreton Bay Region, Queensland, Australia. It is near Samford, 20 kilometres (12 mi) north-west of the Brisbane central business district. Parts of it are within the Brisbane Forest Park and a lookout and recreation area is accessible off Mount Nebo Road.

Until 1955 the train line to Dayboro traversed the area and in 1947 was the location of Queensland's worst railway accident. 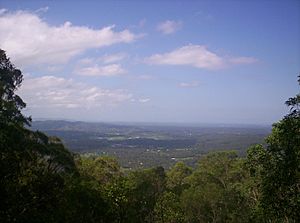 Camp Mountain has a number of heritage-listed sites, including:

All content from Kiddle encyclopedia articles (including the article images and facts) can be freely used under Attribution-ShareAlike license, unless stated otherwise. Cite this article:
Camp Mountain, Queensland Facts for Kids. Kiddle Encyclopedia.