D'Aguilar National Prak is a national park in Queensland, Australia. It contains the D'Aguilar Range and is located along the northwest of the Brisbane metropolitan area. The park is traversed by the winding scenic Mount Nebo Road and Mount Glorious Road.

The park contains eucalyptus woodlands, sheltered pockets of sub-tropical rainforest, a number of crevasses and views of Moreton Bay and the Glass House Mountains. The Walkabout Creek Visitor Centre is located at the edge of the park. There are two formal, vehicle accessible camping areas in the Mount Mee section and eight remote bush camping sites (accessible only by walking) in the southern D'Aguilar (formerly Brisbane Forest Park) section. Popular lookouts include Jolly's Lookout, Westridge Outlook, Camp Mountain Lookout and Wivenhoe Lookout, overlooking Lake Wivenhoe. The villages of Mount Nebo and Mount Glorious are located on Mount Nebo Road on the edges of the national park and are popular stops for tourists driving through the park.

Woodlands and dry eucalypt forests predominate on the drier, shallower soils of the park's foothills. Spotted Gum (Corymbia variegata) and Narrow-leaved Ironbark are two of the main species. There are also small areas of heath and ridges dominated by grass trees (Xanthorrhoea spp). Remnant pockets of lowland rainforest occur in the valleys along some of the watercourses.

At higher altitudes the forests become more complex due to the increased rainfall and generally deeper soils. These mid-altitude forests are dominated by Grey Gum, Pink Bloodwood and Brush Box. Occasional rainforest species are also present and there is a thick understorey of ferns, vines and shrubs. 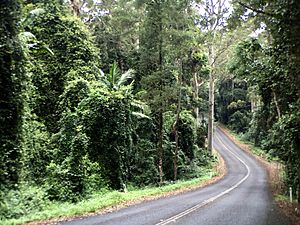 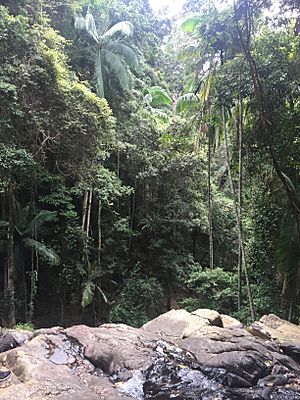 Moist sub-tropical rainforest grows on the highest parts of the range where the rainfall is two-thirds greater than in the foothills, particularly on the rich basaltic soils north of Mt Glorious. Huge strangler figs (Ficus watkinsiana) can be seen emerging through the canopy.

There are a variety of reptile species in the park. This includes the tree goanna/lace monitor (Varanus varius), which is a large monitor lizard and the land mullet (Egernia major), which is a large, shiny black skink. 26 species of frogs have been recorded in the park, including the great barred frog (Mixophyes fasciolatus). The most common amphibian in the park is an introduced pest, the cane toad (Rhinella marina).

All content from Kiddle encyclopedia articles (including the article images and facts) can be freely used under Attribution-ShareAlike license, unless stated otherwise. Cite this article:
D'Aguilar National Park Facts for Kids. Kiddle Encyclopedia.