Lake Wivenhoe is the name both a lake formed by the Wivenhoe Dam and the locality which contains it in the Somerset Region, Queensland, Australia. In the 2016 census, Lake Wivenhoe had a population of three people.

The locality includes the dam wall and associated water management infrastructure at the south, the lake created by the dam, sections of the Brisbane and Stanley Rivers as they flow into the lake from the north and a narrow strip of land around the dam, the lake and river the sections. The lake's boundaries are very irregular and this is reflected in the very irregular boundaries of the locality. The locality is entirely set aside for water management purposes.

The Brisbane Valley Highway passes through the south of the locality as it travels across the top of the dam wall.

The name Wivenhoe comes from the name of the pastoral property established in 1864 by Edmund Blucher Uhr, which took its name from the town of Wivenhoe in Essex, England. 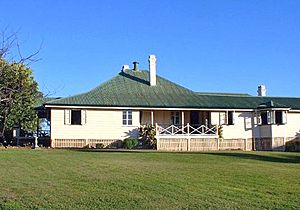 Lake Wivenhoe has a number of heritage-listed sites, including:

Although it is not a populated area, Lake Wivenhoe offers a range of outdoor recreational facilities for camping, picnics, swimming, fishing and water sports.

Camping sites are provided at Captain Logan and Lumley Hill Areas. The managed camping facilities at Captain Logan Camp include hot showers, barbecues and toilets, and are adjacent to playgrounds and a boat ramp at Logan Inlet. Cormorant Bay, Hamon Cove and Spillway Common also have facilities for picnic.

A stocked impoundment permit is required to fish in the dam. Swimming is permitted and camp sites have been established. Electric and non-powered boating with a permit is allowed, but domestic animals are banned.

The heritage-listed Caboonbah Homestead was located on to the north-west of the lake (near but not within the locality of Caboonbah) where it was a tourist attraction operated by the Brisbane Valley Historical Society until the homestead burned down in 2009.

There are three main roads in the area. The Brisbane Valley Highway comes to the lake from the south and then travels along the western side of the lake towards Esk. Wivenhoe Somerset Road separates from the highway at the south of the lake and travels along the eastern side of the dam towards Somerset Dam. Due to the irregular shape of the boundaries of the locality around the lake, both roads weave through the locality and the adjacent localities on each side of the lake. Northbank Parkway comes from Mount Glorious to the east and terminates on the east of the lake at Wivenhoe Somerset Road.

All content from Kiddle encyclopedia articles (including the article images and facts) can be freely used under Attribution-ShareAlike license, unless stated otherwise. Cite this article:
Lake Wivenhoe Facts for Kids. Kiddle Encyclopedia.