Coominya is a town and locality in the Somerset Region in South East Queensland, Australia. The town is located 83 kilometres (52 mi) west of the state capital, Brisbane and approximately 2 kilometres (1.2 mi) from Wivenhoe Dam. In the 2016 census, Coominya had a population of 1,200 people.

Coominya sits on the land of the Indigenous Jagera people.

Coominya is bounded by Logan Creek to the north and Buaraba Creek to the south. Although located closely between Atkinsons Dam to the south-west and Lake Wivenhoe to the north-east, it does not bound either of these two reservoirs. The Brisbane Valley Highway approximately follows its north-east border. The Brisbane Valley railway line passes through Coominya from the north-west to the south-east with the Coominya railway station serving the town. However, the railway line was closed in 1993. 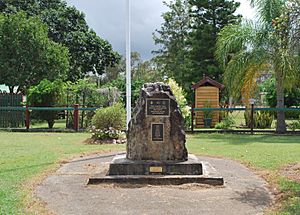 From 1886 to 1906, the area was known as Bellevue (the local pastoral property). The name Coominya is believed to be derived from the Yuggera language where kung means water and nya means to see referring to its lagoons.

Coominya Post Office opened by December 1907 (a receiving office had been open from 1887, known earlier as Bellevue).

The Coominya War Memorial is located on Railway Street and was dedicated on 25 April 1997. 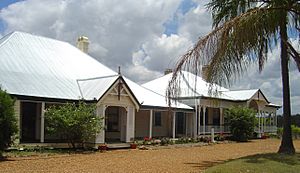 Coominya has a number of heritage-listed sites, including:

Facilities in Coominya include a post office, a general store, a cafe and a pub.

Attractions in the Coominya area include the historic Bellevue Homestead, moved from Wivenhoe Dam to Coominya. Coominya is known for its scenery and wildlife including lorikeet parrots, koalas, kangaroos. 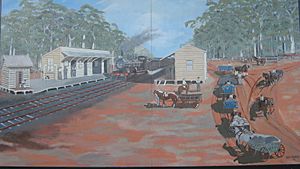 As part of Q150 (Queensland's 150th anniversay) the local heritage society commissioned a series of murals depicting early life at the town.

Coominya is known for its fresh produce.

The major employer is an abattoir. There is a steady increase in olive growing and Comvita have set up an olive leaf extract plant in the town.

All content from Kiddle encyclopedia articles (including the article images and facts) can be freely used under Attribution-ShareAlike license, unless stated otherwise. Cite this article:
Coominya, Queensland Facts for Kids. Kiddle Encyclopedia.