Lowood is a rural town and locality in the Somerset Region, Queensland, Australia. In the 2016 census, the locality of Lowood had a population of 4,159 people.

Lowood was established as the first terminus of the Brisbane Valley branch railway in 1884 and the town grew from the subdivision around the new station. The name is derived from the "low woods" of brigalow in the Lowood area, as opposed to the taller trees elsewhere in the Brisbane Valley. Lowood Post Office opened on 15 October 1888 (a receiving office had been open from 1884). 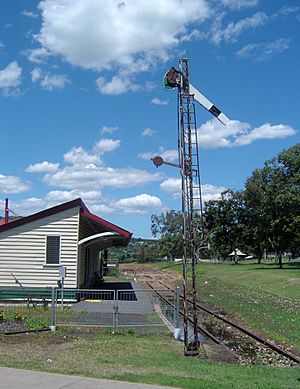 Due to its proximity to Brisbane and Ipswich, Lowood is becoming an area for hobby farmers and residential commuters. Nearby Lake Wivenhoe is a popular place for activities such as boating and fishing.

During World War II, an airfield called Lowood, which was actually located at Mount Tarampa, was the site of a military airfield operated by the Royal Australian Air Force. No. 71 Squadron operated from the airfield during 1943, conducting coastal patrol and naval convoy escort missions. After the war the airfield was converted into a motor racing circuit with the same name and operated for 20 years, the highlight hosting the 1960 Australian Grand Prix. The airfield no longer exists but a small memorial marks its previous location.

Lowood has a number of heritage-listed sites, including:

All content from Kiddle encyclopedia articles (including the article images and facts) can be freely used under Attribution-ShareAlike license, unless stated otherwise. Cite this article:
Lowood, Queensland Facts for Kids. Kiddle Encyclopedia.