Glamorgan Vale is a rural town and locality in the Somerset Region, Queensland, Australia. In the 2016 census, Glamorgan Vale had a population of 404 people. 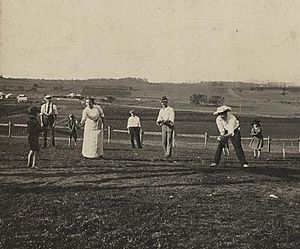 Glamorgan Vale Post Office opened on 1 January 1872 and closed in 1972. Thomas Pratt from Somerset, England was the first postmaster.

Pratt also had the licence for the Glamorgan hotel from 1880 to 1895 and again from 1898 to 1899. He and his family settled in Ipswich, naming their home Glamorganvale. The Hotel was redeveloped and now operates as the Bottletree Hotel.

Glamorgan Vale State School celebrated its 140th anniversary in 2015. The school originally had a principal's house next door which was demolished and turned into a sports field. There is a heritage church across from the school which is now private property. Down from the school, there is community hall, tennis court and public park. Glamorgan Vale is also the home to a cemetery, private airfield, pet motel and the Glamorgan Vale Water Board. There is a scenic country road through the mountains on route from Glamorgan Vale to Lowood, a neighbouring township.

All content from Kiddle encyclopedia articles (including the article images and facts) can be freely used under Attribution-ShareAlike license, unless stated otherwise. Cite this article:
Glamorgan Vale, Queensland Facts for Kids. Kiddle Encyclopedia.