Marburg is a small township of 536 inhabitants located 60 kilometres (37 mi) west of Brisbane, the capital of the State of Queensland, Australia. It is split between the City of Ipswich and Somerset Region local government areas. At the 2011 Australian Census the town recorded a population of 567. 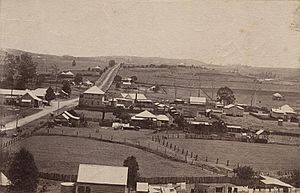 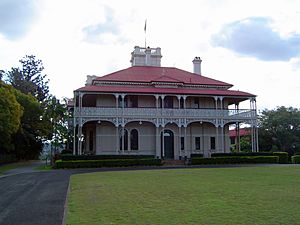 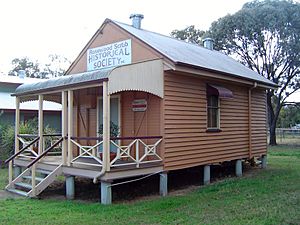 German settlers arrived in the region around the 1860s. The story goes that, when the station master of the nearby Walloon railway station asked the settlers where they lived, the settlers responded with 'ober dar'. He felt that 'ober dar' should have a proper name and since he had read an article about a town in Germany called 'Marburg' he decided to register their produce as coming from 'Marburg'. The settlers liked this solution and the name stuck.

The timber, sugar cane and dairy industries put Marburg on its feet. While Marburg in 1868 was a wilderness, in 1900 Marburg had a courthouse, police barracks, a post office, two hotels, five churches, a State school, a School of Arts, several stores, a blacksmith, a butter factory, a sugar factory and a rum distillery. At that time nearly 80 percent of Marburg's population came from Germany or were of German descent.

Marburg Post Office opened on 1 October 1879 (a receiving office named Frederick had been open from 1878), was renamed Townshend in 1917 during World War 1 and reverted to Marburg in 1919.

Marburg grew rapidly in the first half of the twentieth century, as the main road from Brisbane to Toowoomba passed through the town's centre. Marburg became popular as a stopover for travellers.

Marburg was the administrative centre for local government in the area, composing Walloon Division (1879-1903) and Shire of Walloon (1903-1917).

In 1912 the Marburg branch line from Rosewood to Marburg was opened but only a few years later the railway began to suffer from the competition of highway traffic. It still survived until 1965 when the line was closed.

Because of an anti-German sentiment of some State politicians the name of Marburg was changed during the First World War into Townshend, a name change the locals did not support. Dr. Sirois, the local General Practician at the time, was instrumental in having the name Marburg be re-introduced after the war in 1920, which created a storm of protest but to no avail.

When the Warrego Highway was built in the 1960s, most of the traffic from Brisbane to Toowoomba bypassed Marburg, and subsequently the town has become less populated.

A small creek, the Black Snake creek, runs through Marburg. It is named after the Red-bellied Black Snake. The Marburg 'Black Snake Creek Festival' is a yearly event held in October and features musicians and other attractions.

Marburg has active community groups such as the Marburg and District Resident's Association, the Rosewood Scrub Historical Society, the Marburg Show Society, The Marburg Fire and Rescue Station, the Marburg Rural Fire Brigade and the Marburg branch of the State Emergency Services.

The 'Band in the Park' is an initiative of the Marburg and District Resident's Association on the first Friday of the month at 6.30 pm. Marburg is well known for its 'Marburg dances' which take place every Saturday night in the hall on the showgrounds. Harness racing takes place on a regular basis on the Marburg race course.

'Woodlands' is Marburg's finest building. It is listed by the National Trust as a fine example of the nineteenth century plantation owner's residence and for its historic significance in relation to the development of various primary industries in Queensland. It was built between 1888 and 1891 by Thomas Lorrimar Smith who was the owner of the sawmill, sugarmill, distillery and other business interests in the region. At present the property services as a centre for functions such as weddings, business meetings and conferences.

Marburg has a number of heritage-listed sites, including:

All content from Kiddle encyclopedia articles (including the article images and facts) can be freely used under Attribution-ShareAlike license, unless stated otherwise. Cite this article:
Marburg, Queensland Facts for Kids. Kiddle Encyclopedia.