Rosewood is a small town and locality in the Bremer Valley, Queensland, Australia. It is within the local government area of City of Ipswich.

The town of Rosewood is located 60 kilometres (37 mi) west of the Brisbane CBD At the 2011 census, Rosewood had a population of 2,155. Part of the town's border is marked by the Bremer River to the south, and the decommissioned Marburg Branch railway line on the Little Liverpool Range to the north. 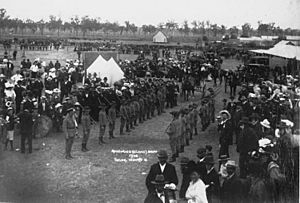 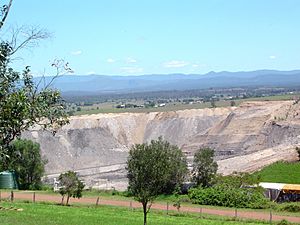 New Oakleigh Mine closed in 2013

The origin of the suburb name is believed to be derived from the Rosewood (Acacia harpophylla) or the Dysoxylum (a Mahogany species, referred locally as a rosewood despite bearing little relation) tree or shrub, both commonly found in the south-east Queensland region at the time of Rosewood's settlement.

The first coal mine in the Lanefield district, west of Rosewood, commenced production in 1918. As part of these workings, two railway branches from the Brisbane to Toowoomba main line were constructed to the mines at Lanefield Colliery (1934 to 1965) and Westvale Colliery (1929 to 1960).

The New Oakleigh Mine is located to the town's north and was one of the last remaining coal mines in the area at the time of its closure in 2013.

Translink also provides bus route 539, which terminates in Rosewood. The route services key Lockyer Valley centres, such as Laidley, Gatton, Grantham and Helidon, to the west of Rosewood.

Rosewood has a number of heritage-listed sites, including:

All content from Kiddle encyclopedia articles (including the article images and facts) can be freely used under Attribution-ShareAlike license, unless stated otherwise. Cite this article:
Rosewood, Queensland Facts for Kids. Kiddle Encyclopedia.