Over recent years, the rural tranquility of the Gatton area has started to be encroached on by the suburban sprawl of metropolitan Brisbane and Ipswich in the east and Toowoomba in the west. The Warrego Highway, which runs east–west through the Shire, has also experienced increasing strip development, with fuel outlets and commercial properties gradually spreading along the highway. 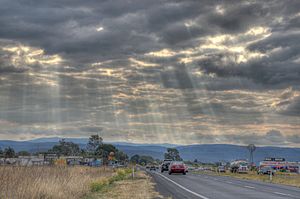 The Gatton area was explored by Major Edmund Lockyer in 1825. A settlement known as Gatton was gazetted in 1855. The post office opened 1 January 1866, with Frederick Lloyd, a dairyman, as the first postmaster. The small village did not experience significant growth until the mid-1870s, after the railway to Grandchester attracted people to the area.

The Queensland Agricultural College opened an agricultural college and experimental farm in 1897 at Gatton.

The Star is a free, local, community newspaper which began publishing in 1956.

Gatton has a number of heritage-listed sites, including:

Edna Linning and her husband started up Gatton Bus Services in 1957 when they heard a high school was being built in town. Originally, the business only had one bus travelling to the college and back; as of the mid 1980s, the business had 14 buses, eight of which were used for school children. The buses travelled to Flagstone Creek, Buaraba, Esk, and Forest Hill to get students. The company also organized tours of Gatton for schoolchildren that lived in the city, so they could understand farm life and see how produce is grown and harvested. In its early days it also ran tours to Brisbane. 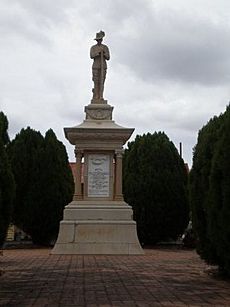 The town has a number of war memorials:

The Lights on the Hill Truck and Coach Drivers' Memorial is located at Lake Apex Park on the outskirts of Gatton.

All content from Kiddle encyclopedia articles (including the article images and facts) can be freely used under Attribution-ShareAlike license, unless stated otherwise. Cite this article:
Gatton, Queensland Facts for Kids. Kiddle Encyclopedia.