Weeping Mother Memorial is a heritage-listed memorial at Hickey Street, Gatton, Queensland, Australia. It was designed by F. Williams & Co and built in 1922 by the same company. The memorial was added to the Queensland Heritage Register on 21 October 1992.

The memorial cost over £500 which was raised through public subscription. A memorial committee was formed and the Chairman, Richard James laid the foundation stone on 22 April 1922. The memorial was unveiled by the Governor of Queensland, Sir Matthew Nathan, on 14 November 1922.

In 1933, a light to illuminate the statue at night was added by the Gatton RSL and Women's Auxiliary and was officially switched on by ex-First World War nurse, Nurse Pollock on Armistice Day.

Many different types of war memorials were erected throughout Queensland, however none are as emotive or as unique in design as the one at Gatton. At the laying of the foundation stone, the memorial was said to be an expression of sympathy with the mothers of fallen soldiers. 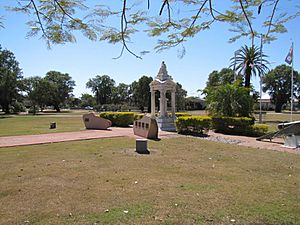 The First World War Memorial is situated in a park setting and is surrounded by mature trees.

The memorial is located in comparatively new landscaping comprising paved pathways and gardens beds with new planting. It is approached by a path from Hickey Street which passes a bottle tree. New sandstone slabs with bronze plates to the front faces are located on either side of the path leading to the monuments. These are memorials to soldiers in later conflicts.

The monument itself stands on a concrete base step. Above this are two smooth-faced marble steps capped by a rounded moulding. The first step is square in plan, whilst the upper one steps in at the centre of each face. 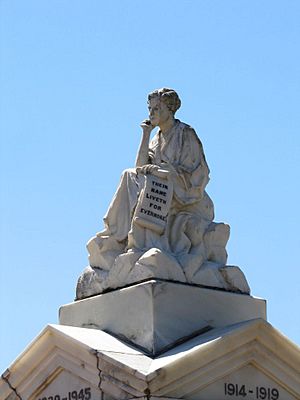 Statue of the weeping mother, 2012

Above this base is a mausoleum type structure comprising four columns and a roof. The floor, from which a central square pillar rises, is laid with black and white marble tiles in a chequerboard pattern. The pillar sits on a base of two steps and is partially covered with a tasselled shroud. It bears the leaded names of the 68 local men who fell in the First World War. The names of those who fell in later conflicts are recorded on the base of the pillar; 23 in the Second World War and 2 in the Vietnam War.

The pillar is flanked by columns at each corner. Each has simply moulded bases, and Greek egg-and-dart ornamentation at the top. The columns support a roof like structure which sits on square blocks at each corner. A curved fascia spans between each block and the roof structure has a pediment to each face. The dates 1939 - 1945 are leaded on the front face. At the centre of the roof is a square base with a mound of rocks above it. Sitting on this is a two-thirds life-size figure of a weeping mother. Her chin rests on her right hand and she holds a scroll which bears the leaded inscription "Their names liveth forevermore".

The monument is made up of different types of marbles. The figure itself is of coarse Ulam Marble. Finer marble with a grey grain has been used in some areas such as the columns and base and black marble has been used on the floor.

Weeping Mother Memorial was listed on the Queensland Heritage Register on 21 October 1992 having satisfied the following criteria.

War Memorials are important in demonstrating the pattern of Queensland's history as they are representative of a recurrent theme that involved most communities throughout the state. They provide evidence of an era of widespread Australian patriotism and nationalism, particularly during and following the First World War

Its design is unique in Queensland and possibly in Australia.

The memorial at Gatton demonstrates the principal characteristics of a commemorative structure erected as an enduring record of a major historical event. This is achieved through the use of appropriate materials and design elements.

The memorial is of aesthetic significance as a landmark and also for its high degree of workmanship and design.

It has a strong and continuing association with the community as evidence of the impact of a major historic event and as the focal point for the remembrance of that event It also has a special association as an exemplary example of mason / sculptor Frank Williams.

It has a strong and continuing association with the community as evidence of the impact of a major historic event and as the focal point for the remembrance of that event It also has a special association as an exemplary example of mason / sculptor Frank Williams.

All content from Kiddle encyclopedia articles (including the article images and facts) can be freely used under Attribution-ShareAlike license, unless stated otherwise. Cite this article:
Weeping Mother Memorial Facts for Kids. Kiddle Encyclopedia.