Grandchester is a town in the Lockyer Valley region in South East Queensland, Australia. It is located 76 kilometres (47 mi) west of the Brisbane CBD and is within the boundaries of the City of Ipswich. The name derives from the old English name for bigge (Grand) and camp (Chester), which was the initial name of the locality, and suggested by the wife of the Governor of the day when the railway opened. At the 2011 census, Grandchester had a population of 504.

Grandchester was the initial terminus of the first narrow gauge mainline railway in the world. The first track opened to traffic on 31 July 1865 from Ipswich, as the Queensland Government was keen to prove the viability of its controversial 'pony railway'. The construction of the Victoria Tunnel through the Little Liverpool Range to the west of Grandchester was behind schedule, and so although it served a very small population, Bigges Camp (as it was initially known) became the terminus for 10 months, until the line was extended to Gatton. The original Grandchester railway station, including the former Station Master's residence, still exists.

Grandchester Post Office opened on 1 January 1866 after the arrival of the railway and closed in 1978.

Grandchester Sawmills is one of the last known surviving steam-powered flat-belt sawmills in Australia. The engine powering it was manufactured in 1908, and the mill has been in operation from 1945. It was destroyed by a fire, sometime in the early hours of 6 May 2007.

Work on the long process of restoring the mill to its former glory started almost immediately in the days following the fire. The mill is operating once again with work still continuing on the restoration. This will ensure that this important piece of history is preserved for the generations that follow. 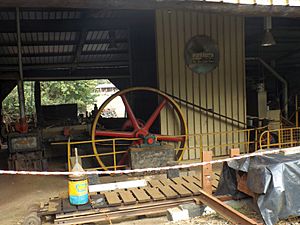 Grandchester has a number of heritage-listed sites, including:

All content from Kiddle encyclopedia articles (including the article images and facts) can be freely used under Attribution-ShareAlike license, unless stated otherwise. Cite this article:
Grandchester, Queensland Facts for Kids. Kiddle Encyclopedia.