Kids Encyclopedia Facts
This page is about the metropolitan area. For the suburb, see Ipswich (suburb), Queensland. For the local government area, see City of Ipswich. For the county town in Suffolk, England, see Ipswich.

Ipswich is an urban region in south-east Queensland, Australia, which is located in the south-west of the Brisbane metropolitan area. Situated on the Bremer River, it is approximately 40 kilometres (25 mi) west of the Brisbane CBD. A local government area, the City of Ipswich has a population of 200,000 (projected to grow to 435,000 residents by 2031). The city is renowned for its architectural, natural and cultural heritage. Ipswich preserves and operates from many of its historical buildings, with more than 6000 heritage-listed sites and over 500 parks.

Ipswich began in the 1820s as a mining settlement and was originally intended to be the Queensland capital but Brisbane was instead chosen because of its geographical accessibility for ships. 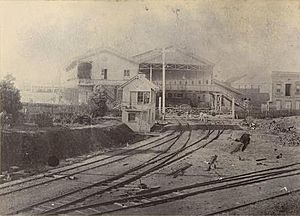 Prior to the arrival of European settlers, what is now called Ipswich was home to many indigenous language groups, including the Warpai tribe, Yuggera and Ugarapul Indigenous Australian groups. The area was first explored by European colonists in 1826, when Captain Patrick Logan, Commandant of the Moreton Bay penal colony, sailed up the Brisbane River and discovered large deposits of limestone and other minerals.

The town began as a limestone mining settlement and grew rapidly as a major inland port. Ipswich was initially named "The Limestone Hills" and later shortened to "Limestone", however in 1843 it was renamed after the town of Ipswich in England. The population was 932 in 1851 and had risen to 2459 by 1856. It became a municipality in 1858. Ipswich was a prime candidate for becoming the capital of Queensland, but Brisbane was instead chosen in 1859. It was proclaimed a city in 1904.

The city became a major coal-mining area in the early 19th Century, contributing to the development of railways in the region as a means of transport. The first recorded coal mines in the central Ipswich area started at Woodend in 1848.

From the 1840s onward, Ipswich was becoming an important river port for growing local industries such as coal and wool from the Darling Downs and a regular paddlesteamer service from Brisbane Town, The Experiment, was established in 1846. This, and other steamer services, remained the primary form of mass/bulk transport between the two cities until 1876, when the construction of the original Albert Bridge, spanning the Brisbane River at Indooroopilly, completed the railway line begun between Ipswich and Brisbane in 1873.

Ipswich was proclaimed a municipality on 2 March 1860 and became a city in 1904. 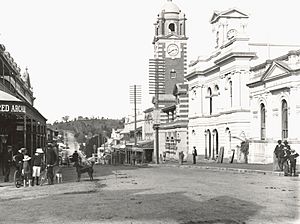 Brisbane Street around the start of the 20th century 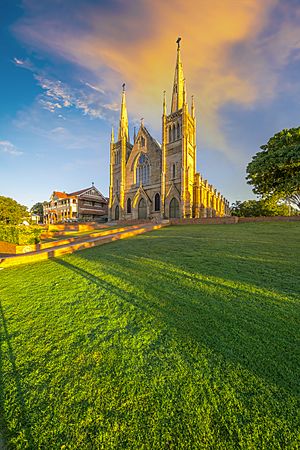 Several members of the British Royal Family have visited Ipswich.

Around 35 people died in the floods in the 1893 Brisbane flood. The Brisbane River burst its banks on three occasions in February of that year and a fourth event several months later. 7 workers were killed at a colliery in north Ipswich as the Bremer River broke its banks.

14 people died in flooding in January 1974, during the Australia Day weekend. Two people were killed in Ipswich. At least 6,700 homes flooded across the region. Thousands of homes in Ipswich and Brisbane could not be recovered.

The Bremer River at Ipswich reached a height of 19.5 metres (64 ft) on 12 January, inundating the central business district and thousands of houses. 38 people died as a result of the floods. At Minden, on the border of Ipswich City, a four-year-old boy was swept away by floodwaters when he fell from a rescue boat. A man in his fifties died when he accidentally drove into floodwaters in the Ipswich suburb of Wulkuraka.

The worst affected areas of Ipswich were the suburbs of Goodna and Gailes. The flooding allowed bull sharks to reach the centre of Goodna; one was spotted swimming in Williams Street, and a second in Queen Street.

A multibillion-dollar class action lawsuit is underway against dam operators Seqwater, SunWater and the State of Queensland. Law firm Maurice Blackburn have lodged the suit on behalf of 5,500 Ipswich and Brisbane residents who lost their homes or businesses during the floods. Modelling released in 2013 claimed flooding of Ipswich CBD would not have been as extreme if Wivenhoe Dam operators had operated the dam correctly. 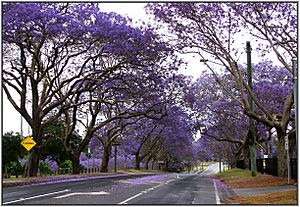 This festival has been held annually at Goodna (Evan Marginson Sportsground) since 1968.

The Ipswich Festival is an annual multi-disciplinary festival. The event showcases a broad program of entertainment and arts that continues to entertain, inspire and celebrate the essence of the culture, spirit and community in Ipswich.

First staged in 1998, the Ipswich Festival is regarded as the city's premier event. The variety, size and scope of the program has grown exponentially through increasing interest group participation, corporate partnerships and community enthusiasm.

The festival presents Ipswich's cultural heritage and highlights the city's emerging talents through a deliberate program of live bands, concerts, art exhibits, fireworks, theatre, jazz, multicultural celebrations, interactive displays and a range of family-based events to encourage participation by all age groups whilst attracting day tourism to the region.

The Ipswich Festival runs for two weeks at the end of April and beginning of May with the majority of events free.

The Fuchs Winternationals is an annual event, typically held around June at Willowbank Raceway, part of the Ipswich Motorsport Precinct. The four-day event is one of the largest drag racing festivals in the southern hemisphere and has drawn crowds of more than 40, 000 people in previous years.

All content from Kiddle encyclopedia articles (including the article images and facts) can be freely used under Attribution-ShareAlike license, unless stated otherwise. Cite this article:
Ipswich, Queensland Facts for Kids. Kiddle Encyclopedia.