George Miller AO (born 3 March 1945) is an Australian film director, producer, screenwriter, and physician. He is best known for his Mad Max franchise, whose second installment, Mad Max 2, and fourth, Fury Road, have been hailed as two of the greatest action films of all time; while Fury Road won six Academy Awards. Miller is very diverse in genre and style as he also directed the biographical medical drama Lorenzo's Oil, the dark fantasy The Witches of Eastwick, the Academy-Award winning animated film Happy Feet, produced the family friendly fantasy adventure Babe and directed the sequel Babe: Pig in the City.

Miller is a co-founder of the production houses Kennedy Miller Mitchell, formerly known as Kennedy Miller, and Dr. D Studios. His younger brother Bill Miller and Doug Mitchell have been producers on almost all the films in Miller's later career, since the death of his original producing partner Byron Kennedy.

Miller was born in Brisbane, Queensland, to Greek immigrant parents: Dimitrios (Jim) Castrisios Miliotis (Miller) and Angela Balson. Dimitrios was born on the Greek island of Kythira, and anglicised his surname from Miliotis to Miller when he emigrated to Australia; the Balson family were Greek refugees from Anatolia, displaced by the 1923 population exchange. The couple married and settled in Chinchilla and had four sons: fraternal twins George and John, Chris, and Bill.

George attended Ipswich Grammar School and later Sydney Boys High School, then studied medicine at the University of New South Wales with his twin brother John. While in his final year at medical school (1971), George and his younger brother Chris made St. Vincent's Revue Film, a one-minute short film that won them first prize in a student competition. In 1971, George attended a film workshop at Melbourne University where he met fellow student, Byron Kennedy, with whom he formed a lasting friendship and production partnership, until Kennedy's death. In 1972, Miller completed his residency at Sydney's St Vincent's Hospital, spending his time off crewing on short experimental films. That same year, Miller and Kennedy founded Kennedy Miller Productions. The pair subsequently collaborated on numerous works. After Kennedy died in 1983, Miller kept his name in the company. It was later renamed Kennedy Miller Mitchell in 2009 as a way to recognise producer Doug Mitchell's role in the company. 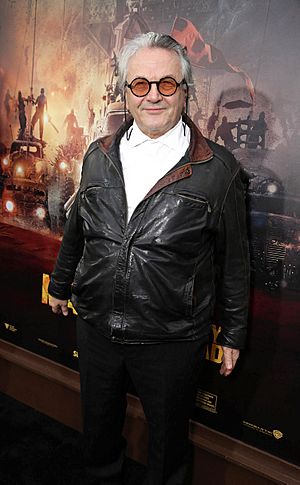 Miller at a Mad Max: Fury Road premiere in 2015

Miller's first work, the short film Violence in Cinema: Part 1 (1971), polarised critics, audiences and distributors so much that it was placed in the documentary category at the 1972 Sydney Film Festival due to its matter-of-fact depiction of cinematic violence. In 1979, Miller made his feature-length directorial debut with Mad Max. Based on a script written by Miller and James McCausland in 1975, the film was independently financed by Kennedy Miller Productions and went on to become an international success. As a result, the film spawned the Mad Max series with two further sequels starring Mel Gibson and a third starring Tom Hardy and Charlize Theron: Mad Max 2 also released as The Road Warrior (1981), Mad Max Beyond Thunderdome (1985) and Mad Max: Fury Road (2015).

During the time between the second and third Mad Max films, Miller directed a remake of "Nightmare at 20,000 Feet" as a segment for the anthology film Twilight Zone: The Movie (1983). He also co-produced and co-directed many acclaimed miniseries for Australian television including The Dismissal (1983) and The Cowra Breakout (1984).

In 1987, Miller directed The Witches of Eastwick, starring Jack Nicholson, Susan Sarandon, Cher and Michelle Pfeiffer. The film proved to be a troubling experience for Miller. "I quit the film twice and Jack [Nicholson] held me in there," said Miller. "He said, 'Just sit down, lose your emotion, and have a look at the work. If you think the work is good, stick with the film.' And he was a great man. I learnt more from him than anybody else I think I’d worked for – he was extraordinary." Nicholson also coached Miller to exaggerate his needs during the production, asking for 300 extras when he only needed 150, knowing that his producers would give him less than he requested. The award-winning production designer Polly Platt also collaborated closely with Miller on The Witches of Eastwick.

Following The Witches of Eastwick, Miller focused primarily on producing Australian projects. His role as producer of Flirting, Dead Calm and the TV miniseries Bangkok Hilton and Vietnam, all starring Nicole Kidman, was instrumental in the development of her career.

Miller returned to directing with the release of Lorenzo's Oil (1992), which he co-wrote with Nick Enright.

In 1993, Miller was hired to direct Contact based on the story by Carl Sagan and Ann Druyan. After working on the film for over a year, Warner Bros. and Miller mutually agreed to part ways and Robert Zemeckis was eventually brought on to direct.

Miller was also the creator of Happy Feet, a musical epic about the life of penguins in Antarctica. The Warner Bros.-produced film was released in November 2006. As well as being a runaway box office success, Happy Feet also brought Miller his fourth Academy Award nomination, and his first win in the category of Best Animated Feature.

In 2007, Miller signed on to direct a Justice League film titled Justice League: Mortal. While production was initially held up due to the 2007–08 Writers Guild of America strike, further production delays and the success of The Dark Knight led to Warner Bros. deciding to put the film on hold and pursue different options.

In 2011, the Happy Feet sequel Happy Feet Two was released. The following year, Miller began principal photography on Mad Max: Fury Road, the fourth film in the Mad Max series, after several years of production delays. Fury Road was released on 15 May 2015. The film was met with widespread critical acclaim and received 10 Academy Award nominations including Best Picture, while Miller himself was nominated for the Academy Award for Best Director.

In October 2018 it was announced that Miller would direct Three Thousand Years of Longing, which began filming in November 2020.

In April 2017, Miller said that he and co-writer Nico Lathouris have finished two additional post-Fury Road scripts for the Mad Max series. The Fury Road lead, Tom Hardy, is committed to the next sequel. In 2015, and again in early 2017, Miller said "the fifth film in the franchise will be titled Mad Max: The Wasteland." In 2020, it was reported that Miller would next direct the Mad Max spinoff Furiosa.

Dr. D Studios was a Sydney-based digital animation studio founded in mid-2007 as a partnership between Kennedy Miller Mitchell and Omnilab Media. Following the financially unsuccessful release of Happy Feet Two (2011) and the long delay of Mad Max: Fury Road (2015), the studio closed down in 2013.

Miller was married to actress Sandy Gore, with whom he has a daughter. He married film editor Margaret Sixel in 1995; they have two sons. The two initially met during the production of Flirting, and Sixel has since worked on all of Miller's directorial efforts in some capacity.

Miller has said on multiple occasions that the 1940 version of Pinocchio is one of his favourite films.

Miller is a feminist, having told Vanity Fair in May 2015, "I've gone from being very male dominant to being surrounded by magnificent women. I can’t help but be a feminist."

All content from Kiddle encyclopedia articles (including the article images and facts) can be freely used under Attribution-ShareAlike license, unless stated otherwise. Cite this article:
George Miller (filmmaker) Facts for Kids. Kiddle Encyclopedia.