Theron was born in Benoni near Johannesburg in Gauteng. Her ancestry is French, German and Dutch.

She did star in a few movies, but only really became noticed when she portrayed the life of Aileen Wuornos, in the movie Monster. She won an Oscar for her role in this movie.

After this, she got a lot of attention from the perfume label, Dior, and appeared in some of their advertisements.

She also does a lot of community work, including for PETA, for their anti-fur ads. She also works with animal rights activists and supports same-sex marriage. She has become one of Hollywood’s most acclaimed actresses.

Theron became an American citizen in 2007. 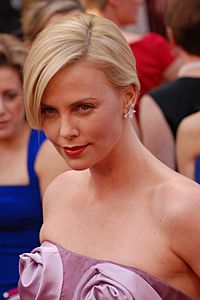 All content from Kiddle encyclopedia articles (including the article images and facts) can be freely used under Attribution-ShareAlike license, unless stated otherwise. Cite this article:
Charlize Theron Facts for Kids. Kiddle Encyclopedia.