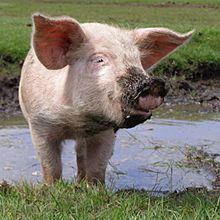 Babe is an Australian-American movie which was made in 1995. It was nominated for seven Academy Awards including the Academy Award for Best Picture in 1996. It won the Academy Award for Visual Effects. It tells the story of a pig who learns how to look after sheep and becomes Australia's champion sheep dog. The movie stars Magda Szubanski, James Cromwell, and Zoe Burton. Some of the voices used by the animal characters were by Christine Cavanaugh and Hugo Weaving.

Babe was made by Kennedy Miller Productions, the producer was George Miller and the director was Chris Noonan. Noonan and Miller also wrote the story. Babe was released by Universal Pictures. Babe was filmed at Robertson, New South Wales.

A second movie about Babe the sheep pig was made called Babe: Pig in the City.

All content from Kiddle encyclopedia articles (including the article images and facts) can be freely used under Attribution-ShareAlike license, unless stated otherwise. Cite this article:
Babe (movie) Facts for Kids. Kiddle Encyclopedia.