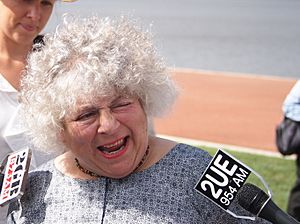 Miriam Margolyes OBE (born 18 May 1941) is an English-Australian actress. She is best known for her role as Professor Sprout in the Harry Potter movie series. She also appeared appeared in the movies The Age of Innocence (1993), which won her a BAFTA Award, Babe (1995), and Babe: Pig in the City (1998). She has appeared in television series such as Merlin, Doc Martin and The Sarah Jane Adventures.

Margolyes was born in Oxford, Oxfordshire. She was the daughter of Ruth (née Walters; 1905–1974), a property investor and developer, and Joseph Margolyes (1899–1996), a Scottish physician from Glasgow. She was grew up in a Jewish family and her ancestors are from Poland and Belarus. She is a lesbian and has been with her partner Heather for over forty years. She has also been an Australian citizen since 2013.

All content from Kiddle encyclopedia articles (including the article images and facts) can be freely used under Attribution-ShareAlike license, unless stated otherwise. Cite this article:
Miriam Margolyes Facts for Kids. Kiddle Encyclopedia.