Robertson is a village in the Southern Highlands of New South Wales, Australia, in Wingecarribee Shire. The town is located on the edge of an elevated plateau (the Illawarra escarpment) about 35 km (22 mi) from the coast. At the 2016 census, Robertson and its surrounding area had a population of 1,865.

Robertson is known for its high annual rainfall and fertile soil. It was previously covered by an extensive temperate rainforest, most of which has been cleared for farming though remnants such as Robertson Nature Reserve still exist. The town is colloquially known as "Robbo" by the locals.

The town is surrounded by lush pasture used for beef and dairy production. It was once famous for cheese production; its distance from, and poor transport to, the Sydney markets meant that in the early days fresh milk was not a viable industry and so the key dairy industries were butter and cheese. The remnants of the cheese industry are seen with one of the old cheese factories remaining in the town; it has been converted into a commercial row of shops. There is also the remnants of an old butter factory at the western end of town. Robertson is now more widely known for potato growing and is the home of the "Big Potato". The Big Potato was built in the 1970s by a local potato grower. Robertson is also where the 1995 movie Babe was filmed. 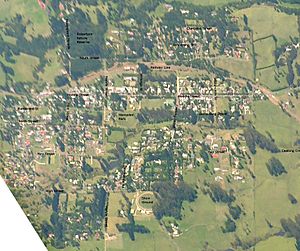 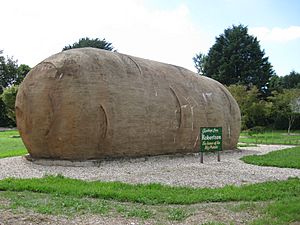 In February or March of each year the Robertson Show is held, featuring "The Great Australian Potato Race".

In Spring Robertson holds a spring festival, with local gardens open to the public.

Robertson is home to the famous hotel "Robertson Hotel", a popular hotel and wedding venue. Robertson Hotel was originally built in 1924 opening as Hotel Robertson and has had an interesting history. The Hotel boasted a nine-hole golf course, two tennis courts, croquet, lawn bowls, billiards, fishing, hunting, horseback riding, and an onsite mechanic who looked after guests' cars during their stay. The hotel won the "Most luxurious hotel in the Commonwealth" award in 1925, and was the first hotel in Australia to have phone lines to every room.

The Hotel was built to draw some of the Sydneysiders, who in the past retreated to the cool climate of the Southern Highlands to escape the heat of a Sydney summer and enjoy the beauty of the countryside. The Hotel was a success and the developer went on to subdivide and develop the local area. This unfortunately was not a success.

In 1930 the hotel was sold and marketed as an exclusive country club and renamed Ranelagh Country Club after Ranelagh Gardens in London. However, the Great Depression made those plans short lived.

In the buildup to World War II the hotel became a WRAAF base, serving as a signals base and a training area for budding pilots. After World War II, the hotel was used as a hospice for returned pilots.

The building sold again in 1947 and became, St Anthony's College, a Franciscan friary and seminary. During this period the hotel was also used as a school and accommodation house run by the monks. It was during this period that the beautiful stained glass windows, rock walls and fountains were built. These are still in the building and around the gardens and grounds.

The Hotel has its own railway platform on the Moss Vale – Unanderra line, which is still used today.

In 1972 the Monks moved to smaller premises in Campbelltown and the building returned to its intended use as a hotel, named Ranelagh House.

The Hotel was sold again in late 2007, and was renamed Fountaindale Grand Manor and Ranelagh Gardens, the hotels is undergoing major renovations and refurbishments. Recently it was renamed to Robertson Hotel.

On 15 March 2008, the Illawarra Fly Tree Top Walk opened to the public. It is similar to the Otway Fly, in Victoria. It is perched on the Illawarra escarpment at Knights Hill, located east of Robertson. The tree top walk is joined up with an observation outdoor tower that will allow visitors to see spectacular views of Wollongong. It is expected approximately 200,000 visitors every year. 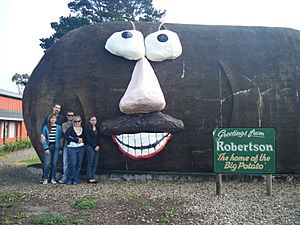 The pranksters posing with the Big Potato Face

Built in 1977 by local potato grower Jim Mauger, the Big Potato stands with carisma on the main street at the eastern end of town. It was modelled on the Sebago potato and is approximately ten metres long and four metres wide. Often under-appreciated, the Big Potato has been described as looking like a "turd in a field" and differences of opinion over its merit can turn into a right royal blue. The original idea was for this structure to contain a Potato Information Centre but rising costs chipped away at this dream and in the end it boiled down to nothing. Recently the locals of Robertson have worked together to turn the surrounding land into a park to be desireed by locals and tourists alike.

On 6 March 2010 a group of young people adorned the potato with a very large face, to help brighten up the tourist attraction for the local agricultural show. It was built in secret during the weeks leading up to the show and even the owners of the potato and the surrounding land had no idea that it was going to happen. Sadly this work of guerilla art was torn down and damaged on its first night, but it generated enough buzz to appear in a few newspapers, several news websites, blogs, national radio and two members of the group were asked to appear on the national TV show The 7pm Project. Despite requests to rehang the face the artists considered the damage to be too significant to rehang it, but had not ruled out repairing it and putting it back up for a future special occasions. In 2011 on same weekend in March the artists sneaked back into the village in the early morning and rehung the repaired face on the big potato. It has since been donated to the local chamber of commerce to be used for promotional/tourist purposes and has been hung to promote the Robertson Christmas in July festivities in 2012 and, with the addition of a santa hat, in 2013. 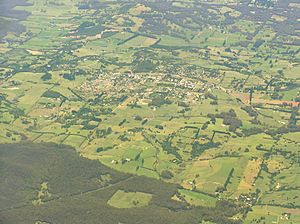 Robertson was served by a railway station on the Unanderra–Moss Vale railway line. The railway line is mainly used for freight. East Coast Heritage Rail operates its Cockatoo Run train on a monthly basis across the line from Sydney to Moss Vale and return (via Wollongong). Other heritage trains sometimes use the line, however no regular passenger services are present on the line.

CountryLink buses travel along the Illawarra Highway, linking the Southern Highlands to Wollongong. The Illawarra Highway winds down the escarpment via the Macquarie Pass. Robertson would be impacted by an upgrade or replacement to Macquarie Pass. Despite some Illawarra and Highland residents strongly supporting an improvement to the link between Robertson and Albion Park, no government has shown any interest in such a project.

All content from Kiddle encyclopedia articles (including the article images and facts) can be freely used under Attribution-ShareAlike license, unless stated otherwise. Cite this article:
Robertson, New South Wales Facts for Kids. Kiddle Encyclopedia.