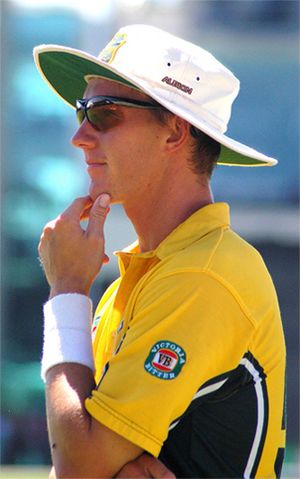 Brett Lee (born 8 November, 1976 in Wollongong, New South Wales) is an Australian cricketer. He has played for the Australian national cricket team and New South Wales Blues. He has taken more than 300 wickets. Brett is a very fast bowler, one of the fastest the cricket world has known. His fastest delivery was 161.4 km/h (100.3 mph). Lee won the Donald Bradman Young Player of the Year Award at the Allan Border Medal award ceremony in 2000 soon after his debut and has gone on to win many awards and a few tournaments.

He is the second of 3 boys and first played cricket with his brothers.

All content from Kiddle encyclopedia articles (including the article images and facts) can be freely used under Attribution-ShareAlike license, unless stated otherwise. Cite this article:
Brett Lee Facts for Kids. Kiddle Encyclopedia.