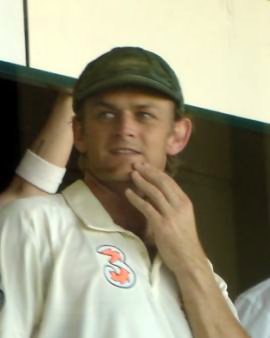 Adam Craig Gilchrist (born 14 November 1971 in Bellingen, New South Wales) is a former Australian cricketer. He was a wicket keeper and a left handed batsman. In his test career, Gilchrist hit 100 sixes, something nobody else in history has done. He holds the record of the second fastest century maker in history.

All content from Kiddle encyclopedia articles (including the article images and facts) can be freely used under Attribution-ShareAlike license, unless stated otherwise. Cite this article:
Adam Gilchrist Facts for Kids. Kiddle Encyclopedia.