Man of the match facts for kids

Some sports have unique traditions regarding these awards, and they are especially sought-after in championship or all-star games. In Australia, the term "best and fairest" is normally used, both for individual games and season-long awards. In some competitions, particularly in North America, the terms "most valuable player" (MVP) or "most outstanding player" (MOP) are used. In ice hockey in North America, three players of the game, called the "three stars", are recognised.

In sports where playoffs are decided by series rather than individual games, such as professional basketball and baseball, MVP awards are commonly given for the series, and in ice hockey's NHL, for performance in the entire playoffs.

In football, the "man of the match" award typically goes to a player on the winning side. Players who score a hat-trick, or goalkeepers who keep a clean sheet under pressure often get the award. Hat-trick scorers usually receive the match ball whether or not they are officially named man of the match.

The man of the match is often chosen by a television commentator or a sponsor. However, not all competitions have an official man of the match award, so sometimes accolades are given by websites or newspapers instead. In the Premier League, for example, a player receives a small black and gold trophy for their man of the match performance. 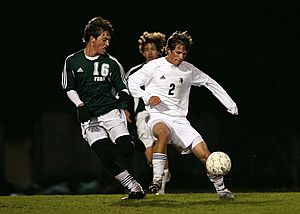 In Australian rules football, the player of the game is often referred to as having been the "best on ground" (or "BOG"). Media outlets provide immediate, unofficial recognition that is largely honorary, often on a 5–4–3–2–1 or 3–2–1 voting basis. Players may receive a Tissot watch as an award for their "best on ground" performance. Officially, the AFL recognises the player of the game as being the player awarded the maximum three votes by umpires in the Brownlow Medal count at season's end. Exceptions are made during the season for certain reserved games such as the Western Derby, The ANZAC Day clash, QClash, and Showdown, where medallions are officially rewarded in presentations following the conclusion of the match. On the day of the AFL Grand Final, a player will be awarded the Norm Smith Medal as being the best on ground voted by an independent panel of Australian rules football experts.

In the Gaelic games of hurling and Gaelic football, the "man of the match" (Irish: Laoch na hImeartha, "hero of the game") is commonly awarded after important games. An unusual example was the 2008 All-Ireland Senior Hurling Championship Final, where the award was given to Brian Cody, the Kilkenny manager, rather than to a player.

In the women's sports of camogie and ladies' Gaelic football, the term "player of the match" (Irish: Laoch na hImeartha, "hero of the game") is used instead.

In North American ice hockey, the three players who perform best in the game, often either those who accumulate the most points or outstanding goaltenders, are usually designated the Three stars of the game: the top-performing player is the first star, and so on. This tradition originated in the 1930s as a promotion for a "Three Star" brand of gasoline.

However, in international play (and outside North America), the three stars concept is rarely used. Instead, other leagues may issue awards to one player who performed best in the game.

Both codes of rugby, rugby league and rugby union, commonly have man of the match or player of the match awards. In televised or sponsored matches, a commentator or sponsor often decides who gets the award, and it is presented to the winner after the match.

In college basketball and college football, the two collegiate sports with the most television coverage in the United States, a top player from each team is usually honoured as "players of the game." These athletes usually cannot collect material prizes due to NCAA regulations. Instead, television companies broadcasting the game or corporate sponsors will often make donations to the scholarship funds of each school in the names of the winning players.

The National Football League names an MVP for two prominent games on its schedule:

Individual games typically have an informal player (or players) of the game chosen by the broadcast network covering the game; one prominent example of this phenomenon is the Turkey Leg Award, All-Iron Award and Galloping Gobbler trophies awarded for games held on Thanksgiving.

The Canadian Football League awards two MVP awards for its championship game, the Grey Cup. The Grey Cup Most Valuable Player award is open to all players; the Dick Suderman Trophy is limited to players with Canadian citizenship or who were raised in Canada since childhood.

All content from Kiddle encyclopedia articles (including the article images and facts) can be freely used under Attribution-ShareAlike license, unless stated otherwise. Cite this article:
Man of the match Facts for Kids. Kiddle Encyclopedia.