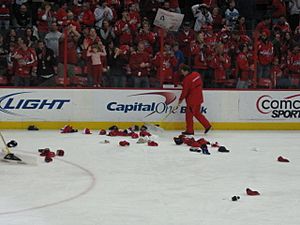 A hat-trick, hat trick or hattrick in sports means that something is done 3 times. For example: goals, wickets and so forth.

The term first appeared in 1858 in cricket, to describe H. H. Stephenson's taking three wickets with three consecutive deliveries. Fans held a collection for Stephenson, and presented him with a hat bought with the proceeds. The term was used in print for the first time in 1865. The term was eventually adopted by many other sports including hockey, association football, water polo and team handball.

A hat-trick occurs in association football when a player scores three goals (not necessarily consecutive) in a single game, whereas scoring two goals constitutes a brace.

In recent years, hat trick has been more often used to describe when a player hits three home runs in a game.

A hat-trick occurs in cricket when a bowler dismisses three batsmen with consecutive deliveries. The deliveries may be interrupted by an over bowled by another bowler from the other end of the pitch or the other team's innings, but must be three consecutive deliveries by the individual bowler in the same match. Only wickets attributed to the bowler count towards a hat-trick; run outs do not count.

In both field hockey and ice hockey, a hat trick occurs when a player scores three goals in a single game. A hat trick, as it is known in its current form, culminates with fans throwing hats onto the ice from the stands. The tradition is said to have begun among fans in the National Hockey League around the 1950s.

All content from Kiddle encyclopedia articles (including the article images and facts) can be freely used under Attribution-ShareAlike license, unless stated otherwise. Cite this article:
Hat-trick Facts for Kids. Kiddle Encyclopedia.